Moe rarely poses for me! Maggie flew away from me. I must admit that hurt a bit. I haven’t seen her in months. I’d stop by and look for her but could never see her anywhere? Eagles do get upset If you do not stop in to say hello.  They act just like humans!

A crescent moon rises with Romeo looking on.

This is Deadman island,its in Tofino’s harbour. The Natives would take their dead there and put them up in the trees. (Which was not a bad idea if they died of something contagious!) They believed it was Evil spirits that killed their loved ones and so wanted the evil spirits to be elsewhere!

They would put them in small Bentwood boxes. Many times the limbs would have to be broken to fit into these beautifully hand crafted wooden boxes. 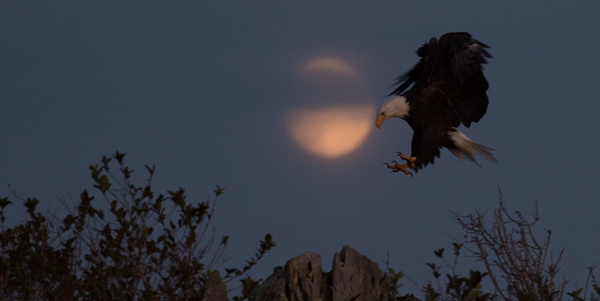 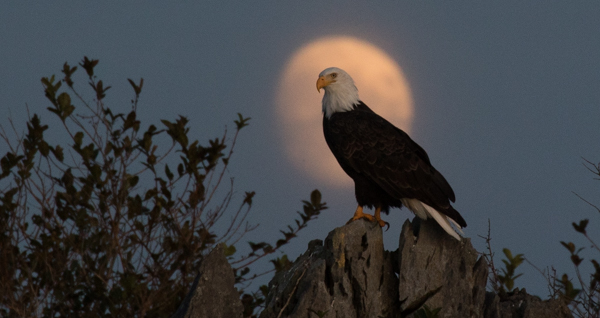 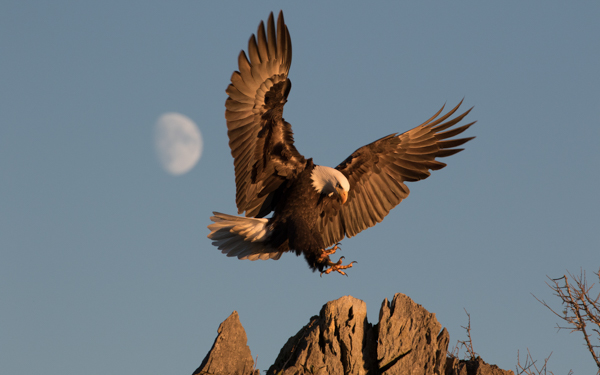 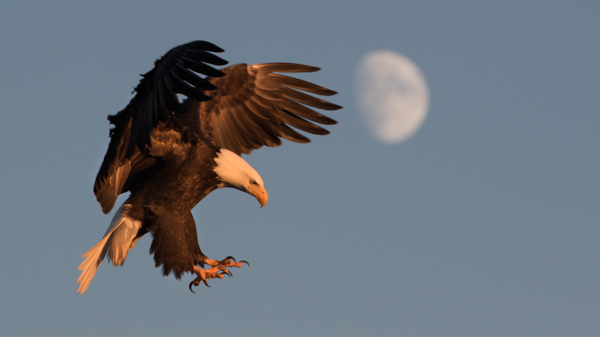 The 50th anniversary of the Apollo 11 moon landing is coming up on Saturday July 20. I remember watching the black and white TV images and holding my breath! Very few moments in human history have had so many people doing the same thing at the same time!

The Eagle landed in the sea of Tranquility on July 20th,1969. The Apollo 11 crew were  Neil Armstrong,Buzz Aldrin and Michael Collins. Armstrong and Aldrin went down to the surface while Collins stayed in the Columbia orbiting the moon.

My eagle friends and I salute all of the good souls who worked so hard to make this remarkable achievement! 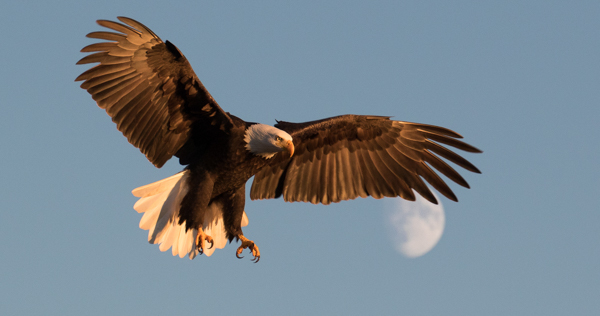 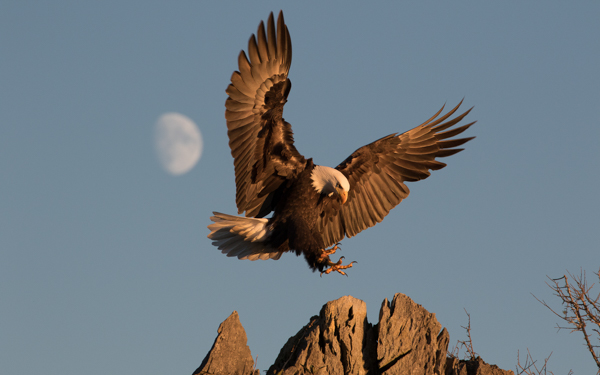 This is Romeo perching upon his throne. I knew where he was going to perch. I lined the moon up in behind and called him,he came straight over! I think I got 2 or 3 sequences of him perching. The golden light is icing to the cake!

I was happy to see Moe hanging around even if he’s not a fan.

I was trying to line this Heron up with the moon.It took me into the shallows.I was worried about my prop being smacked by a rock.It took my attention away for just a few seconds but long enough for me to miss it “jumping”! Would of been a great shot!

With the full moon being on Sunday & today/tomorrow being overcast,this will be the only moon shot I get this time around. 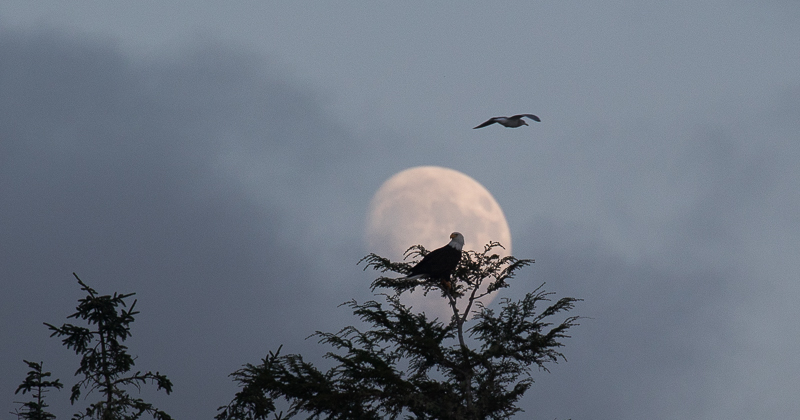 I knew that the moon was coming up tonight but didn’t see it until I was heading back in.Once I saw it I had to turn around & go back to Romeo.I asked him to perch at the very top of his tree………..& the little bugger did! I appreciated him doing that but the best perch is a bare tree top.Notice how some of the limbs obscure his body.I always like a complete silhouette but will settle for what I got!

I took this shot down in Tsapee Narrows.This is “The Daredevil” & “Delilah”. They’ve been gone for months! I haven’t a clue where they went? Delilah is the one on the left.

Believe it or not,I asked Romeo to come over to this spot…….& he did!It was the only perching spot he goes to that had a clear sight of the moon in behind.He even turned sideways! Such a good boy!

I originally thought this was “Delilah” but now am questioning that? This eagle seems to act differently than her. It could still be her of course but she’s doing things differently & The Daredevil isn’t around at all!

Because I am not out watching my eagle friends all the time,they do things that I do not know about? Having said that,nobody knows more about what they are doing than me.

So for the last 3 months I haven’t seen either “The Daredevil” or his partner “Delilah”! I haven’t a clue where they went or why? They live about a mile east of Tofino in Tsapee Narrows on Eik islet.

I haven’t seen them on their nest island or on any of their favourite perching trees? I’ve noticed flocks of birds (Crows,Gulls) perched on their nest island.That would never happen if they were there! Nothing comes close to the nest while nesting is going on.All eaglets by August are usually fully fledged.True their nest is hidden,but I still should of seen some sort of activity!

After the eaglets are fully fledged & fly the coup,both adults usually fly north to their favourite salmon streams.The salmon runs start sooner the further north you go. Another wish of mine……….to know where they go exactly? I don’t think a GPS unit could be attached without affecting the flight.

Having said all that,Delilah turns up last night after being MIA for three months! The Daredevil still hasn’t shown up however? She treated me like a stranger.

Eagles are a strange lot sometimes.

The forest fires are altering the moons colour!

I was disappointed tonight with the sunset colours.True,the colour was still good but I was expecting deeper,richer colours from that forest fire haze.Im guessing that the haze was dispersed by gentle breezes? I could see the haze layer had settled in the lower levels of the atmosphere. So the sun didn’t change colour until it was almost set.Normally during these events the sun changes it’s colour far higher up.Maybe tomorrow night will be better?

Tim is on top with Tam hiding.

British Columbia is in the midst of 130 active forest fires at the moment with no relief in sight!

The intense heat makes huge thermal plumbs.Finer particulate rises but the heavier particles sink.The heavier particles act like water.They flow down valleys to the ocean.We are under outflow conditions right now.The wind normal moves from the west to the east.In “Outflow” conditions the wind direction reverses.So we (Vancouver island) are not only getting all that smoke haze but also hotter air from the interior!

I’ve been watching as the haze has migrated to the west coast.I always love these conditions photographically!

Btw,I’m not saying forest fires are good,just the affect of them on the suns colour.

All this suspended particulate matter blocks the weaker wavelengths from getting through our atmosphere to our eye.Only the longer more powerful wavelengths can make it through. “R.O.Y.”  Red,Orange & Yellow. Thats why the suns colour changes.

The outflow forest fire haze will thicken in the days to come,shifting the suns colour towards pinkish/orange! 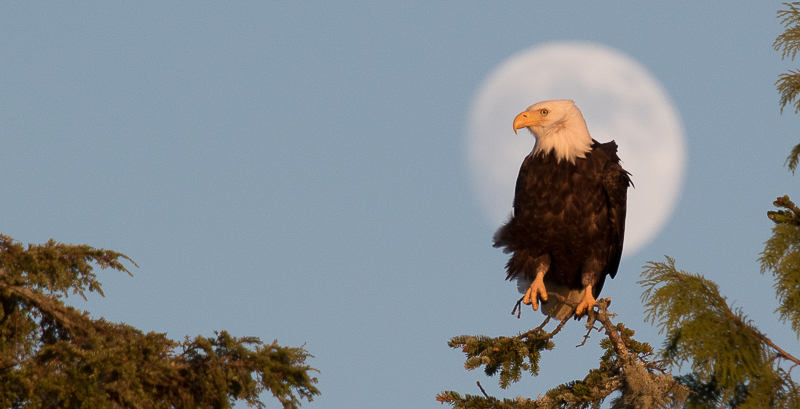 Romeo thankfully posed for me with the moon.The moon was perfect but all night I couldn’t find any of my eagle friends anywhere?

I’ve never met this eagle before.I placed the moon to the right because I knew it would take off a few seconds after me stopping.Eagles are a skittish lot. 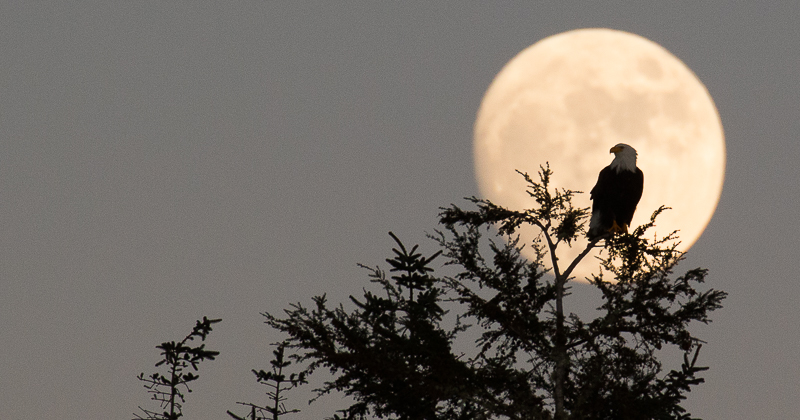 Lets hope our weather will be clear enough to view this cosmic wonder? It won’t occur again till 2034. 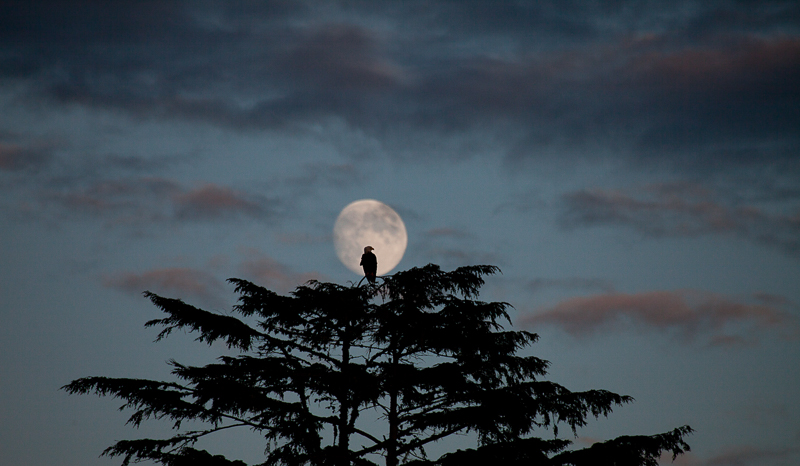 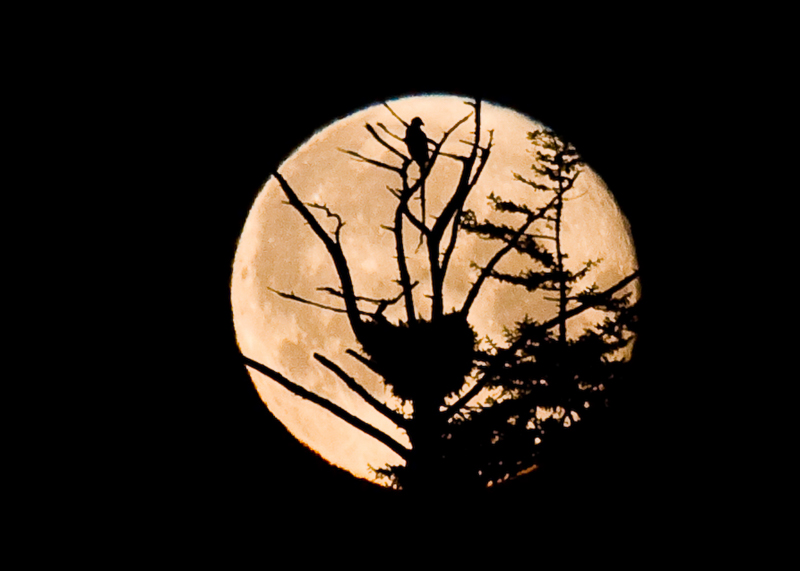 It’s a full moon tonight but because of bad weather,I’m not going to see it.So I decided to post some previous moon shots. I’ve found eagles to be a excellent subject to take pictures of when the moon is rising.They’re both up in the sky.

Tonight is what they call a “Hunters” Moon.(the first full moon after a harvest moon) 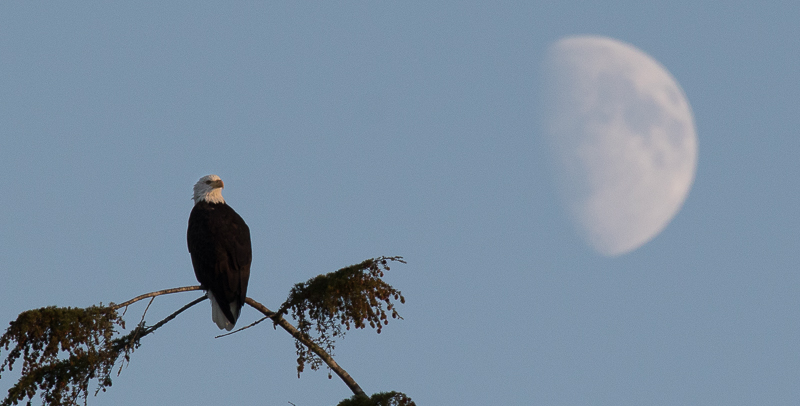 I do not know this eagle.It was in a spot that made it easy to line the moon up in behind.

I found a second eagle that was up high so I could put the moon in behind. 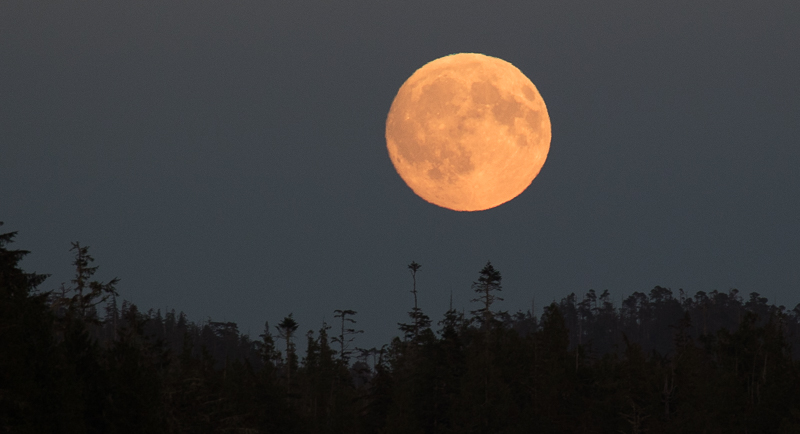 Full moon is this Friday,Sept 16th. 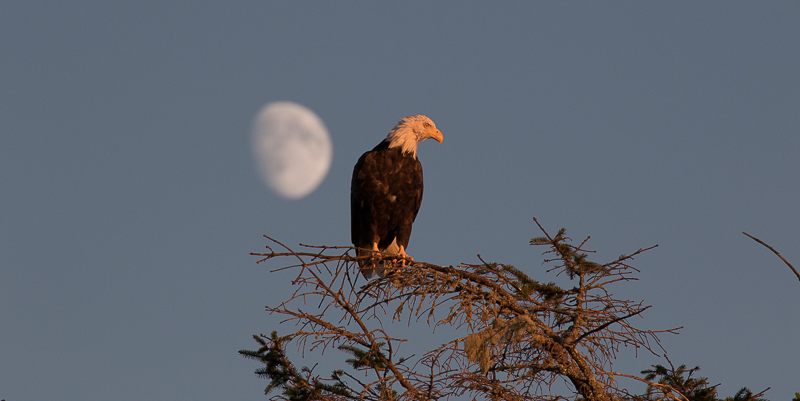