This was originally posted on January 28th,2015.

January 28th was a clear,calm & cold day. So I decided to head down to the very end of Tofino inlet (Deer bay) to search out Trumpeter Swans.They like these quiet areas. It took about 90 minutes for me to get down there.It’s about 30 klicks to the east of Tofino.

Sure enough there were some Trumpeters down in Deer bay. After getting a few shots I decided to go further into Deer bay to have my treat! I like to bring something sweet with me.I shut the engine off & enjoy my treat.

As I was heading into Deer bay when I noticed something very odd? I saw a Eagle standing in the water! 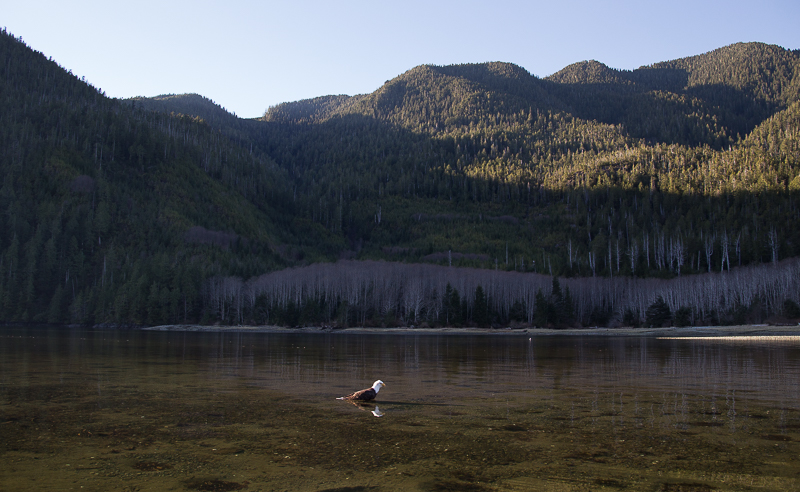 I was perplexed as to why a Eagle would be standing in cold water? The only thing I could think of was that it was injured? If It was injured it would surely be just a matter of time until it died.

I shut the engine off & pulled it up.I poled my way in. It was shallow & the tide was coming in.The eagle wasn’t even acknowledging my presence! It just kept staring ahead ignoring me.I talked gently to it for awhile to let it know that I was not a threat. I did this for 15 minutes or so. Obviously animals cannot understand english but they can understand tone,pitch, loudness………& thus intent.

I mentioned at one point that it had better get out of the cold water as the tide was coming in & that it would get hypothermic! As soon as I did that,it opened it’s powerful wings up & began to walk/swim to a near by log! I noticed as it lifted it’s right talon that it had something? I first thought it was a fish but it turned out to be a bird! A female Hooded Merganser to be precise!

It had caught & was drowning it when I stumbled upon it!

I was amazed at this sight & also my great luck! Eagles do not have retractable talons like a cat. They have to have something solid to push against to extract them.

It shook off the water & began to pluck the hapless Merganser wildly! Feathers & down were flying everywhere!

After a few minutes of plucking,it began to feast! It must of ate for 10 minutes!

By this time I was clicking away madly!

It stopped eating, looked up at me & began to sing! There was no wind so the serenade was echoing off the surrounding mountains! The sound & moment raised the hairs on my neck! I think it was a victory song. Many times a eagle will begin to sing after making a kill.Singing “What a jolly good fellow I am” I’m sure! I would also like to think it was a thank you song to me,for not taking it’s prize!

Notice in the above shot the nictitating eye lid.It a semi transparent thin membrane that closes from front to back.It protects & cleans the eye.

After singing for a few minutes,It grabbed the leftovers & flew off down the inlet!

I yelled out “THANK YOU” & began to review the shots.I was busy there for 5 minutes or so when I heard the very distinctive sound of a pair of wings getting closer. I looked up & saw that it was flying back towards me! It went straight past me,chirped & promptly disappeared up Tofino creek!

To me this whole event was remarkable! I see my eagle friends on a daily basis for many years.So they get use to me & understand that I am not a threat! As a result, I can get close to them.

The amazing thing for me was that I’ve never met this eagle before! Because this eagle showed remarkable courage, I am calling it “Braveheart”!

One of my more memorable experiences! 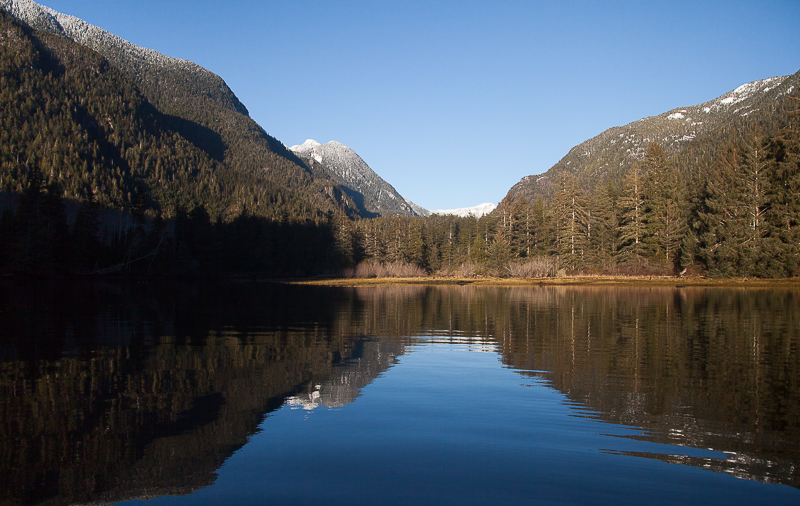 I went all the way down Tofino Inlet to Deer Bay.About 1 1/2 hours away.The ice sheet was gone but the Trumpeters were there.There are seven staying in Deer bay right now.

Tried to go up Tofino creek but the water was too shallow & the tide was already dropping.I wanted to go to the old prospectors cabin up river.I can only get there during high tides.

So I shut the engine off & drifted back out.Thats when I heard the distinct sound of a generator coming from further upstream.Someone must be staying at the cabin? I bet it’s Hunters?

Left that mystery alone & headed back to Tofino.Visited with my eagle friends & got some good shots! Was a tad chilly for me today,but I managed to stay fairly warm.

I went down Tofino inlet today.I went to the end,Deer Bay,or at least as far as I could go.There was some ice down in the bay.I wanted to find out how extensive the ice sheet was & If the Trumpeters were down there?

The ice was,but the Trumpeters weren’t! With nobody home I took some panoramic shots.The light was perfect & so were the clouds.Not too much & not too little!

A really pretty spot to hang out for awhile & I had it all to myself!

I went down Tofino inlet to see if I could any shots of the Trumpeters? The swans always hang out at the very end of these deep inlets.Tranquil,Deer Bay & Grice Bay.

I wasn’t shocked to find a ice sheet covering all of Tranquil but I was surprised to find that both inlets (Tranquil & Deer bay) had not only frozen  over completely but had also joined together! From Barryman point to Rankin rocks was all ice straight across & down into each inlet! Thats 6 klicks down to Tranquil & 12 klicks down to Deer bay.

I saw many birds standing out on the ice or should I say “skating about”? I think I even saw a game of shinny break out?

The thickest ice would be down at the very end where the Trumpeters hang out.

I’ve worked down in Tranquil for several years & have never seen it this extensive,so I wondered why?

We have a big strong (cold) High pressure system for almost two weeks.Each night has been below zero.

I suspect our tides have something to do with it as well?

Each day there are 4 cycles of 6 hours each.Two high tides & two low tides. From the high tide to the low tide determines the amount of water coming in & going out the inlet.If there is a huge difference between the high & low tide,the “flush” will be great.If the difference between the high & low is not that much,the flush will be much less.The greatest flush we can have around here 14 feet.

Our tides lately haven’t been that high or that low.This makes a much smaller flush of about 5 or 6 feet.When the water doesn’t move very much,the ice structure can form more easily.

So you need a large fresh water source flowing into the inlet.The density of the salt water & freshwater is different so they do not mix readily.The colder temperatures makes this mixing even harder! So the fresh water can not only lay on top of the oceans surface.It also spreads out for many kilometres!

It should start to break up as soon as the tides get higher,temperatures rise & the wind picks up.

Than I will be able to get more shots of the Trumpeters!

I “tried”to go to the end of Tofino inlet today with try being the operative word. I already knew there was a good chance I wouldn’t be able to.Our cold weather has created ice at the ends of the inlets! I wanted to photograph the Trumpeters that stay down in Deer bay but encountered this expansive ice sheet! If I had moved slowly, I probably could of gone further down the inlet but to be honest, going through ice makes me nervous in a inflatable boat. I could see a flock of Gulls walking about further down & knew that the thickness was too much anyways.

You can see the “Cape Ann” way down in Deer Bay. It looks so small in this setting! 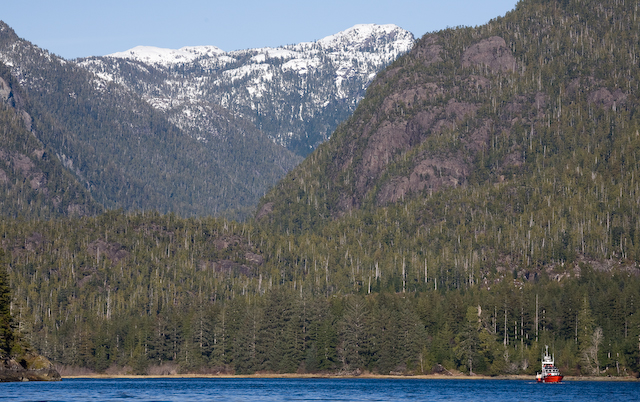 My friend(Stuart) and I went out to Virgin Falls today.
The light was poor by the time we got to the falls and it didn’t inspire me enough to get my camera out!
I did take a few panoramics however. We went to check out the bears ,but the light by that time had failed totally!
Technically speaking ,Deer bay is on the far right in the back a few klicks.

I had to climb up onto a small rocky cliff to get this view. I wanted to get the trees in the foreground ,out of the foreground .
This is Tofino Inlet and as you can see , a very beautiful spot. I’ve always like this angle of the Inlet. At the end of the Inlet is Deer Bay. There is a logging road that runs along the south side of Tofino Inlet to the falls.
This valley was carved out by the last Glaciation,about 10,000 years ago.

This is a good view of Deer Bay from the west.
I heard that when Orcas’s give birth,they prefer these fjord like inlets.

My Tweets
Join 2,887 other followers