We received 253 mm of rain yesterday alone.If your American & still are using imperial,253mm comes up to 10 inches. One advantage of having lots of rain are sunset pictures. I’ve found the best beach shots need lots of rain.Low tide needs to be near sunset as well. Low tide gives lots of surface area.

All that rain bleeds out onto the beach making a beautiful mirror! Having great clouds is just icing to the cake!

Today is the anniversary of the last BIG earthquake in the Pacific Northwest! It was 318 years ago tonight (January 26th,1700).It hit at 9:16pm & was estimated to be between 8.2-9.2. The Tsunami travelled at the speed of a jet plane across the Pacific & hit Japan 10 hours later!

Japanese fishermen left early in the morning with their boats to go fish out in deep water.When they came back at the end of the day their homes & villages were gone! The tsunami went right under their boats,they didn’t notice a thing. Tsunamis only show themselves in shallow waters & usually by that time it’s too late to run.

This Tsunami was called the “Orphan” tsunami because the Japanese didn’t know where it came from? There was no earthquake? It didn’t come from the Japanese coast but from the west coast of North America. The epicentre was roughly 150 kilometres west of Salem Oregon.(45N,125W)

A section 1000 kilometers(620miles) of the Cascadia subduction zone let loose suddenly & the land subsided 20 meters(66 feet). What had taken hundreds of years to build up,was released in one second! The effect must of been felt for hundreds of miles inland!

Of course the only inhabitants along the west coast in 1700 at that time were the FN.Many villages were wiped out from not just the tsunami but also land/rockslides. I could not find any data on how many died but suspect it would be measured in the thousands?

With all the build up along the west coast now, the next  large earthquake death toll will be horrific! Most certainly measured in the hundreds of thousands.Not to mention the destruction to all the major cities along the coast & the financial toll that would be felt for decades!

…………the worst part is there isn’t a dam thing that can be done about it!

Of course, if you see a large truck barrelling down the road,you get out of the way. Unfortunately we do not know when that truck is next coming? So by the time you see it,….it’s too late.

I suppose being aware of it helps some in preparation but the vast majority will be caught with their pants down!

I was just woke up to a earthquake/tsunami warning at 1:31am Pacific time.The epicentre was 265 kilometers(165 miles) southeast of Kodiak Alaska & registered at 7.9.A tsunami alert was issued for the west coast.Tofino was in the direct path.The primary wave would take around 3 hours to reach us.

The warning & alerts appears to of been called off at 4:30am (pacific). The earthquake was a “Strike Slip” quake & not the damaging “Thrust ” quake! Basically the difference is that a strike slip moves horizontal & a thrust fault moves vertically! When water is displaced vertically thats when a tsunami is created! This earthquake did not have that as it was a “Strike Slip”.

We dodged a bullet this morning!!

Update:(4:30pm same day) – I have thought more about this Tsunami warning & how it has affected everyone? It’s not a matter of “IF” a large subduction quake will happen,It’s more about “WHEN”?

I use to be a Geologist & have studied earthquakes & tsunamis. The earth is composed of very large plates that basically float around crashing into other plates. These areas are called  subduction zones.The subduction zone off the west coast of America is called the “Cascadia subduction zone”.It goes from Alaska right down to the southern tip of South America.There are basically two types of plates,oceanic & continental. The oceanic plates are composed of minerals that are denser than the continental crust.So when these two plates meet,the oceanic plate always goes under the less dense continental plate.This denser plate is being “subducted” back into the earths hot core where it’ll remelt. As long as this oceanic plate keeps moving along (about the same speed as your finger nails grow) no problems.It’s when this plate sticks that problems arise.A plate can stick for hundreds of years & suddenly let loose!  Which releases an enormous amount of energy! This energy propagates outward to other parts of the earth much like throwing a pebble into a pond,except more 3 dimensional. The earth is rung like a huge bell.This energy reverberates back to it’s origin & we call these “aftershock” waves.

What happened this morning was a release of energy (7.9) from a strike slip fault 280 klicks south of Kodiak island.Not all faults are created equal.A strike slip fault is when two sides move past each other horizontally.These quakes are benign compared to their big bad cousin the “Thrust” fault! A strike slip fault moves horizontally but a thrust fault moves vertically! This vertical movement either pushes the ocean water up or drops it down.Either way this produces a tsunami.(Japanese for harbour wave) How large the tsunami will be is dependant upon how large the energy release was & how close to the surface it was released? A shallow 6.0 can be more deadly than a deeper 7.0 quake if it is right under your city.So how far away the epicentre is also very important!

When there is a large subductive quake,like the boxing day quake of 2004 off of the northern tip of Sumatra,the energy released propagates along the oceans surface as a large tsunami. These events have been going on for millions of years. The last time the Cascadia subduction zone released was January 26th,1700 around 9pm. How do I know that when it was so long ago? A Geologist (Brian Atwater) with the U.S. Geological Survey at Department of Earth and Space Sciences University of Washington figured it out.He was over in Japan discussing earthquakes with peers.He met another fellow Geologist who was Japanese (Kenji Satake). The Japanese keep meticulous earthquake/tsunami records. Satake talked about a tsunami hitting their coast back in 1700 but had no record of a earthquake prior? So this tsunami was nicknamed the “Orphan” tsunami. Because a wave travels around the same speed (960 kph or 600 mph)They calculated back the distance & speed of the tsunami & arrived at the date January 26th,9pm (Pacific)1700.

The “Ghost forest” in Washington State confirmed this date by carbon dating of the dead trees.A large swath of land dropped down enough for the salty ocean water to inundate. As a result the entire forest died from the salt. Atwater found solid evidence to back this theory up.

So the last time the Cascadia subduction zone released was 9pm January 26th,1700.(8.7-9.2 est.) Around 1000 kilometers (620 miles)”unzipped” along the Cascadia & the land dropped around 20 meters(66 feet)! They not only could calculate that but also saw all the other previous tsunamis.There have been 13 other megathrust events in the past.It appears the average length of time is around 500 years. (this is for quakes over 8.0) So set your watches for the year 2200?

The first thing to be affected during a large event of this nature is the power grid.The power will usually go out right away. Than the primary surface wave will rip through cracking the earths surface.This cracking will most assuredly damage the roads.

So………. my long winded explanation comes to this conclusion about Tofino.We have two tsunami sirens.One in Cox bay & the other at the northern end of Chestermans beach near the Wickaninnish Inn.They are hooked into the electrical grid.Neither have any emergency power back up. The power will go out & there will be no warning of a tsunami! (also because the pole base is in sand,the sand will liquify & the poles will most likely fall over) The people who are not killed from the initial shaking will get into their cars & head to higher ground.Only to find a long line up of cars going nowhere!Why? Because the road will have large cracks in it making it impassable!These people will be stuck in the tsunami zone.The best they can do is to abandon their cars & walk into town.The only problem with this option is that the tsunami will only take about twenty minutes to hit.I fear many people relying upon their cars for transport will be caught in this deadly web?

The one thing I saw last night that I fear “may” be a problem is people relying upon their cars for safety. I saw cars parked on front lawns.Anyone who relies on cars to escape the tsunami zone might be getting themselves into a situation?

So in conclusion,the poles need to have back up power & everyone needs to be able bike it………..& we both know that ain’t going to happen.

The west coast is no stranger to large wind storms.In the last week we have had record breaking storms hit us hard.To prevent injuries local beaches have been closed during high tide events.

It has been said that the waves hitting the west coast are the largest ever recorded in history. 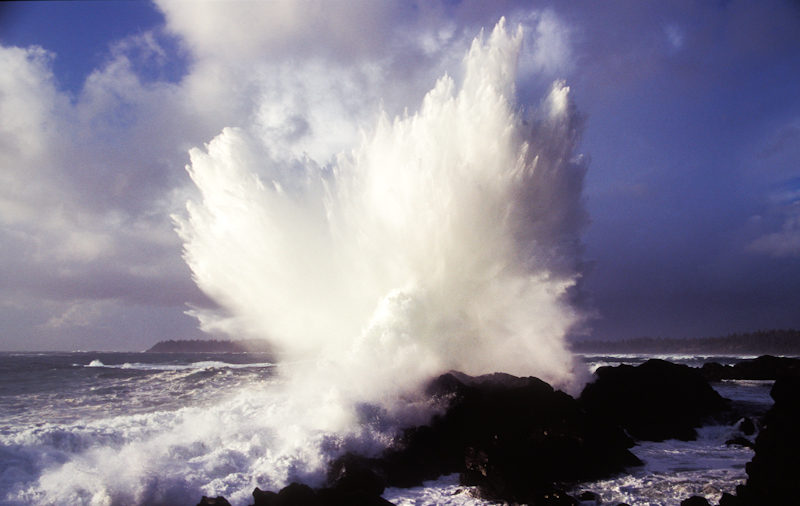 We get some large storms during the winter on the west coast.The power went out twice yesterday. Defiantly poor canoeing weather! 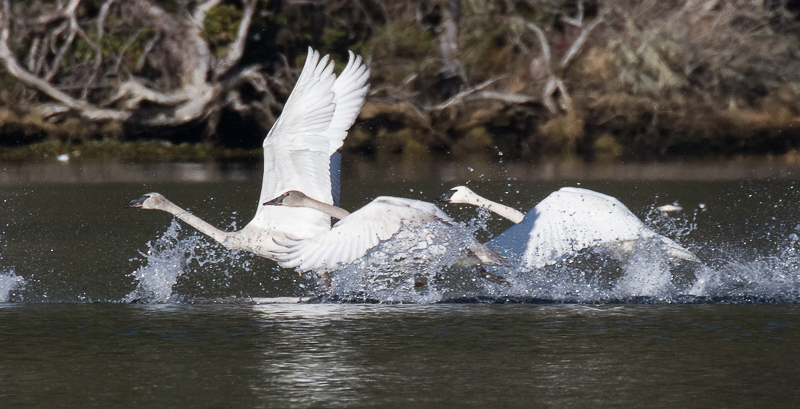 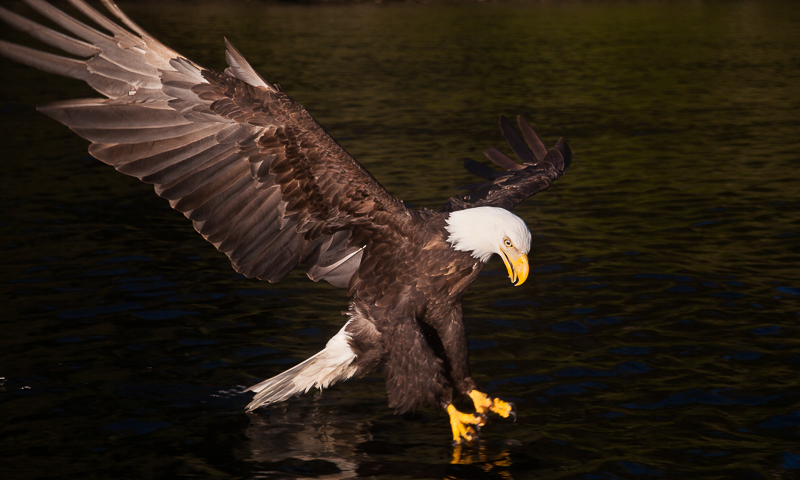 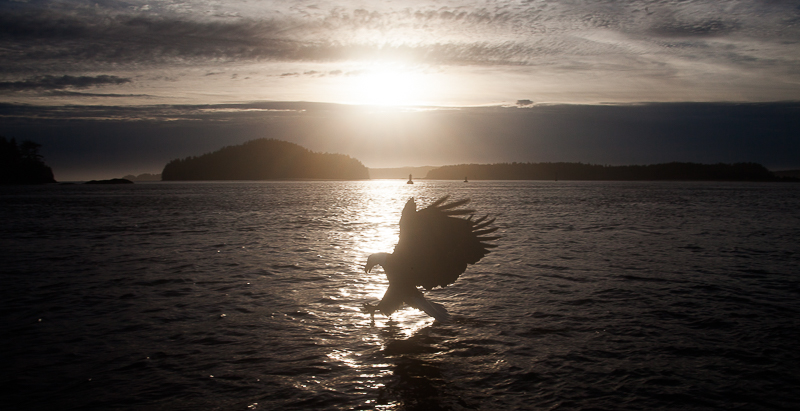 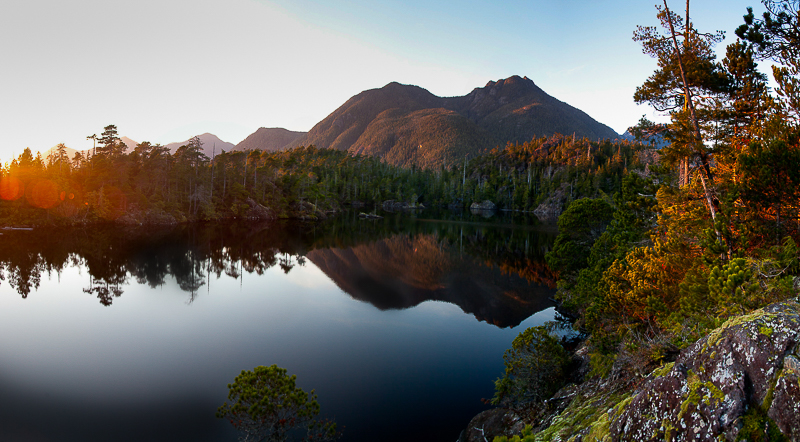 Larry lake is about 50 minutes away from Tofino on highway #4. It’s located up on a large hill called “Hydro Hill”. Larry lake is a small sub-alpine lake stocked with Rainbow trout.

I happen to be passing by when the sun was perfect!

I went paddling on New Years day.I had Tranquil all to myself!

I went camping up in Tranquil for New Years.I awoke New Years day to the sound of Trumpeters close by! A family group had come into Tranquil to feed. They only do this during high tide.

For years I’ve seen these circular dug out shallow holes in the gravel but couldn’t figure out who or what was doing them? I found scat (which was the same shape as Canada Goose scat) beside the holes,so I “assumed” it was Trumpeters? After seeing them feeding in this spot I’m positive the culprit are Trumpeters!

They turn upside down & shovel out the gravel to form these very circular holes!I haven’t a clue what their eating? Might be insects or some other marine invertebrate? I’ll have to dig around myself to see whats crawling about.

Getting close to a Trumpeter is very difficult! I could see them but they couldn’t see me. I had to shoot through some brush.

I found this family group in Tranquil inlet.Two adults & 3 Cygnets.The collective noun for a group of Swans is  a “ballet”.

Rankin has been busy with many birds.Mostly Dunlins & Black-Bellied Plovers.

These Black Turnstones were having a nap. Birds will twist around & put their beak in their feathers.The air in their would be warmer to breath in.

With the tide being high,I went down to the end of Grice bay to check on the Trumpeters.Had to be over 40 of them with many hundreds of other birds as well.Because Grice bay is so shallow (it physically empties at low tide) nobody goes down there.The birds know this & love to congregate down at the end.

I think I’ll put my trail camera down here to capture them much closer!