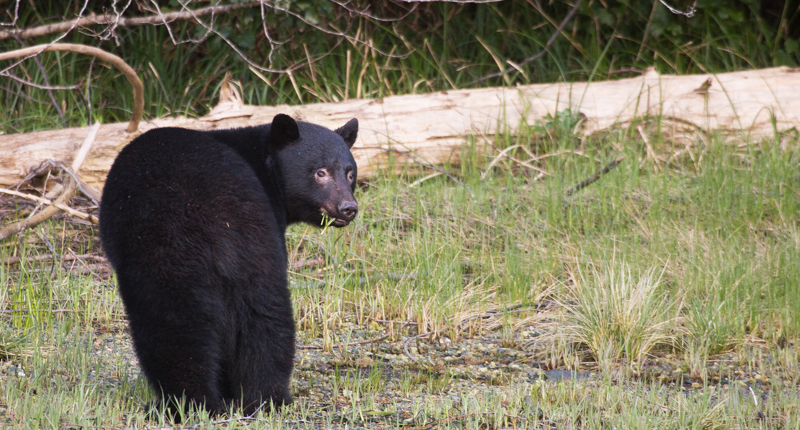 I went up into Fortune Channel looking for bears (as I’ve been doing for over a month!) & found this female.
I was pushed for time because of getting out later than normal. This bear recognized me from last year & was not alarmed that I beached the boat (it was too far from shore) & walked towards it.
The light was gone when I shot these. Some silly clouds,which by the way left as soon as I was exiting Fortune!
Great to finally see one of my furry friends out of bed! 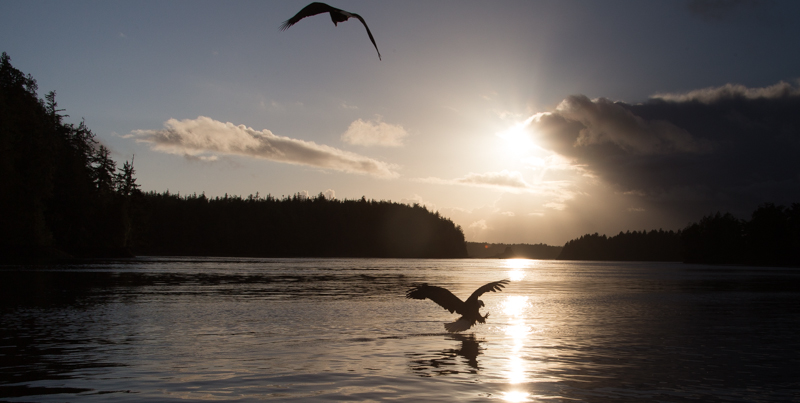 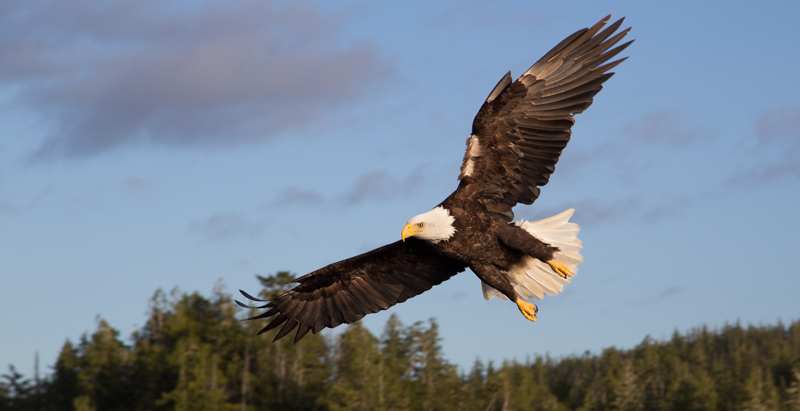 I originally shot this on May 18th of 2014. It’s been rainy so much that I’m forced to revisit older shots.
Romeo is my favourite male eagle & Maggie my favourite female. Each is so unique in their personalities! One only needs to slow down & observe to see.

It’s a sign of Spring when you start to see the tourists coming back. Like the swallows of Capistrano!
This is a hand made canoe. It was dug out from a single tree. Each tribe has it’s unique style for the bow & stern shape.
I’m always fascinated by seeing tourists paying money to paddle. Reminds me of Tom Sawyer & the fence he was painting!

I went out today with the intention of going down to my camp site & clearing out more of the underbrush.
In the past I was able to walk into the site when the tide was low. With the tide being low once again I decided to walk in with my chainsaw & Machete. Unfortunately because of all the rain we’ve been getting,I wasn’t able to get into the site like before. I wasn’t thinking clearly. In hindsight I should of realized that the river would be swollen & flowing strongly from all the rain we’ve been getting in the last week! I should of taken my chest waders! Hindsight being what it is,I decided to go back to my beached boat & try to find another route in?
I went over to the far side of the bay. I had to take the engine off the boat,take out the fuel tank & everything for that matter. I have wheels on the back of my boat that allows me to bring the boat up out of the water onto beaches. Unfortunately the engine & everything else in the boat really weighs down the rear end! I can’t lift the rear end to put the wheels down with all that weight! So I had to pull everything out,put the wheels down & haul the boat up. I than put everything back in. The tide was now starting to come back in & I didn’t want anything floating away! I figured I was high enough for several hours of work before the ayer would be coming close.
Going all the way across the bay to the other side sure made it difficult! It was a much longer walk in! I had to carry a heavy chainsaw & walk along the shores edge. I found a animal trail but it was only good if I we’re a midget! I had my machete my way through at any rate!
I finally made it to the site & set about to clearing all that underbrush. Took me the better part of two hours.
When I arrived it was sunny,but as I was walking back I noticed the clouds had moved in & snuffed the light. I knew I wasn’t going to be doing any great shots with poor lighting!
Went back to the boat & all was fine. I saw some fresh bear scat while going along the shore line & knew they we’re starting to come out from their dens. Last thing I needed was for a bear to find my boat & start chewing away on everything & destroying it!
So I was glad to see everything was untouched when I got back.
I put the boat back in the water & headed home.
I decided to visit with my girlfriend Maggie. Not only to say hi & but also to show you how badly the light was. She came straight over & greeted me as per normal. She’s always such a sweetheart to visit! Each animal has it’s own personality! She & I get along famously! She flys back to her island to have her treat & thats when I have to make my get away. If I don’t, she’ll fly straight back to me. She will than chase me. She wants me to stop. She reminds me of a dog chasing you as your driving away!
After I get up on a plane in my boat, I can look behind me & see her flying behind.She looks like a huge kite flying directly behind me! She’s watching me eagerly & wants me to stop. She’s such a cutie!
Anyways,you can se how badly the light was at this moment & now understand better why my motto is “I chase the gold”! Golden horizontal light is the best!
I just had to say hello to my fine feathered friend after not seeing her for over a week! She warms my heart every time!

Forget about the groundhogs! The best way to know Spring has sprung is when the Hummers come back!
These are Roufus. The F-18 of the Hummingbird world!

I headed out earlier than normal today. I wanted to go to my camp site. The high tide was at 2:20pm & I wanted to be there about a hour before so that I could stay for awhile. Tranquil becomes almost impossible to get into or out of if the tide is too low. You need a pair of chest waders if you try to go in during low tide.

So I headed down to my camp site. I’m setting up a camping platform for the Fall. I want to be there when the salmon start running. I want to get shots of the bears grabbing the salmon!
The bears can only grab the salmon at low tide. Less water means less room for the salmon to get away! All the bears instinctively know this.
So I need to set up a camp. I’m putting my tent on a sleeping platform about 5 feet off the ground.
I’ll be leaving it there year round,so to stop curious bruins from doing any damage,I’m putting a strip of nails all along the edge of the platform.(carpet smooth-edge) If one comes across the platform & is curious,It’ll have to put it’s paws on the edge to check things out. Thats when it’ll get a reminder not to do that again. It won’t be harmed,but will understand not to investigate any further!
I’m going to use a canvas wall tent. I’ll build a internal wood frame & slip the tent over it. I’ll have a wood stove to keep the moisture out.
I’ve used these kind of camps before when I was a exploration Geologist. They work well.

So I arrived at high tide. I tied up & began to unload. Unfortunately, I wasn’t very careful unloading my chainsaw. I threw it on land but there was a slope. Before I could catch it,It rolled into about 5 feet of water. I was able to grab it with my paddle but there was no way I was going to be able to use it.
I also had a machete,so went to work clearing the underbrush from the site.
I now have a much better idea of what I need to do because of going during high tide. I came in a few weeks ago during low tide. I tied up the boat out in the estuary & walked in to the site.
Things sure look different between low & high tide!
After clearing as much as I could,I went for a short ride up Tranquil. I always love getting up into Tranquil! It’s such a beautiful place!
With my task done, I headed out of Tranquil.
I went to Tsapee Narrows to visit with the Daredevil & Delilah. It’s mating season right now,so all the eagles are staying close to each other. They both posed for me,but did so in the shadows. I always hate shooting in the shadows. No colour & the contrast is weak.
Stayed with my feathered friends for about 15 minutes. Took a few shots & said goodnight.
I next went to visit with Maggie over on Morpheus island. As per usual,she was waiting & flew out to greet me. She just circles above me. She’s the only one that does this. She’s larger than most so I assume she has more muscle power?
Had a nice visit with my girlfriend & said goodnight. I headed over to visit with Romeo/Juliette.
Juliette wasn’t around but Romeo flew out to greet me. Took a bunch of shots of my friend & called it a night.
I stay out till after sunset.I’m getting back later & later now.
I was on my way back to the beach when I noticed a large “blow” off in the distance! It was a Grey whale coming into the harbour! I only got a few silhouette shots of it before it disappeared. The sun had already set,so silhouettes were the only thing I could get.
After it went down a second time I couldn’t find it again,so headed to the beach.

Aside from my blunder with the chainsaw,it was a great afternoon shoot! That whale coming around at sunset capped off the day nicely! 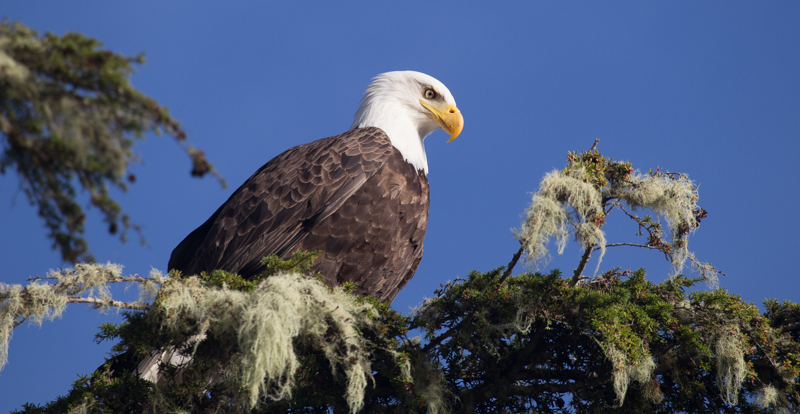 The Daredevil is the one on top. 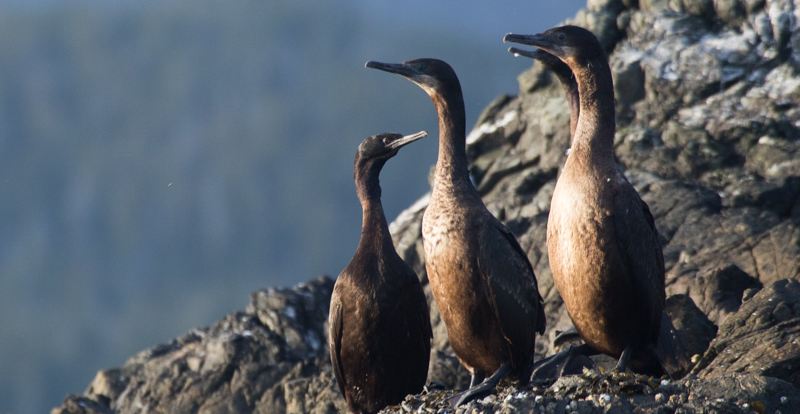 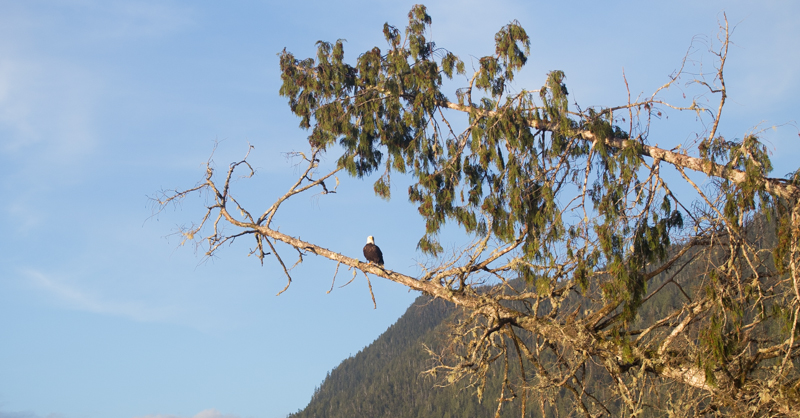 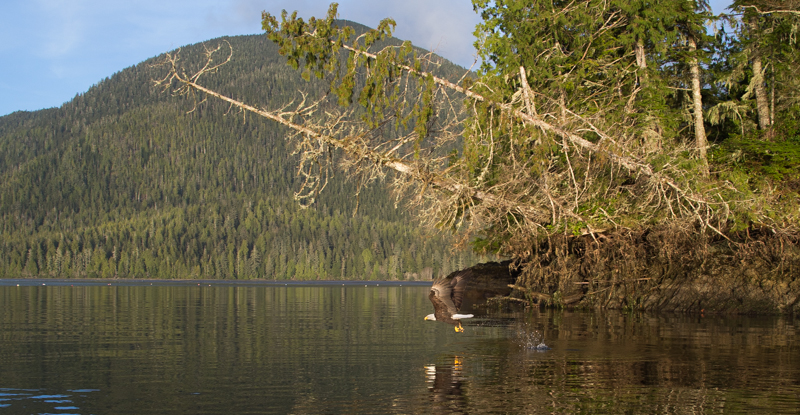 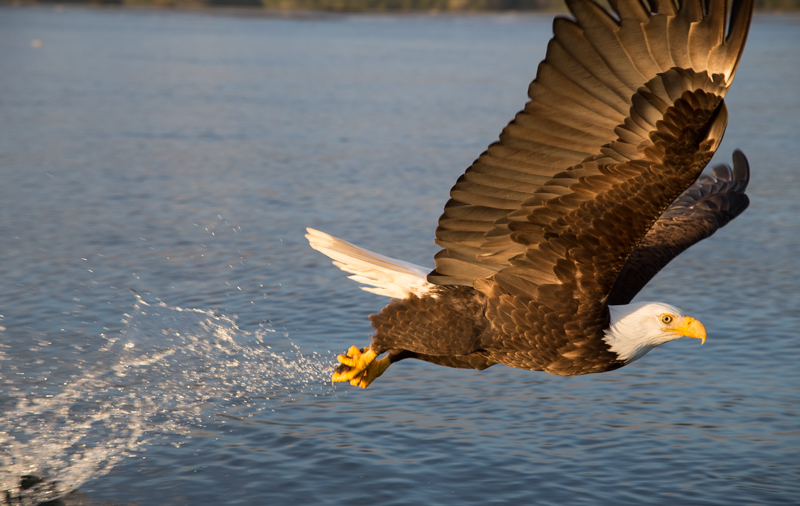 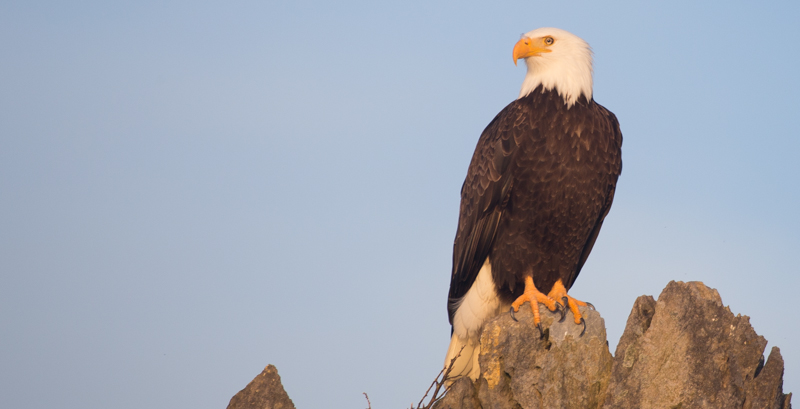 No matter what Romeo does,he always looks so cool doing it!
Eagles are such a cool animal to hang out with to begin with! 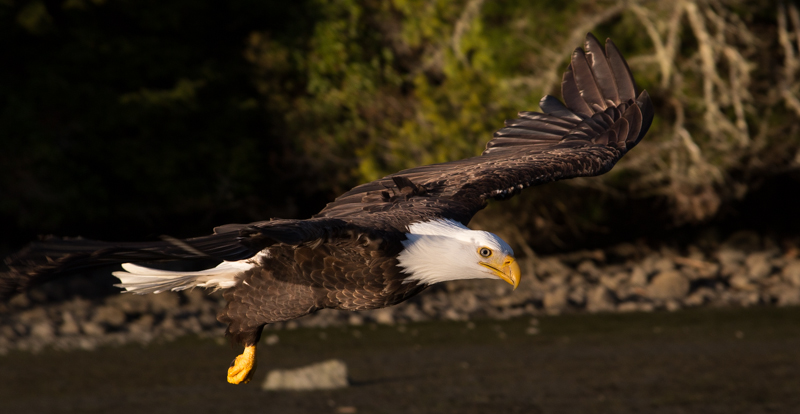 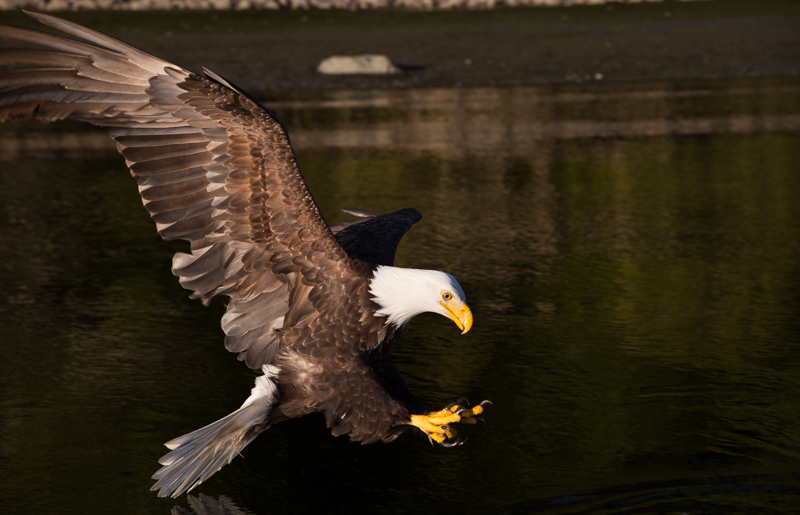 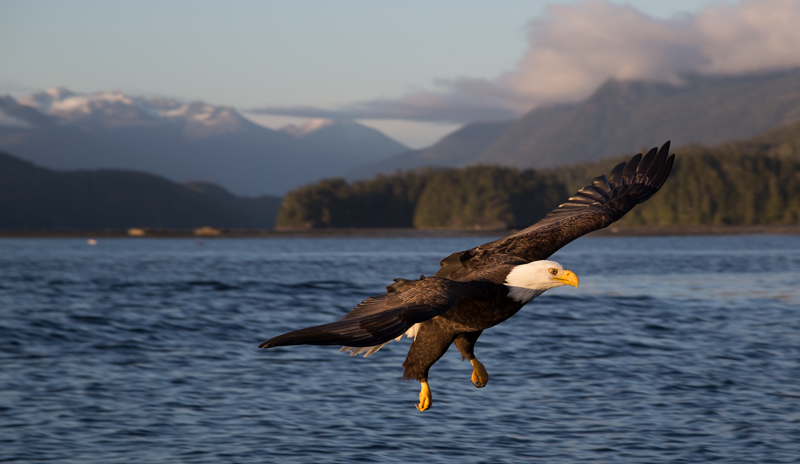 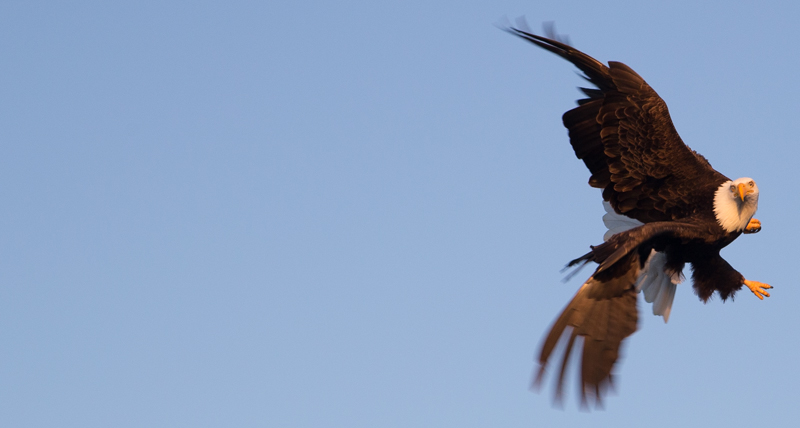 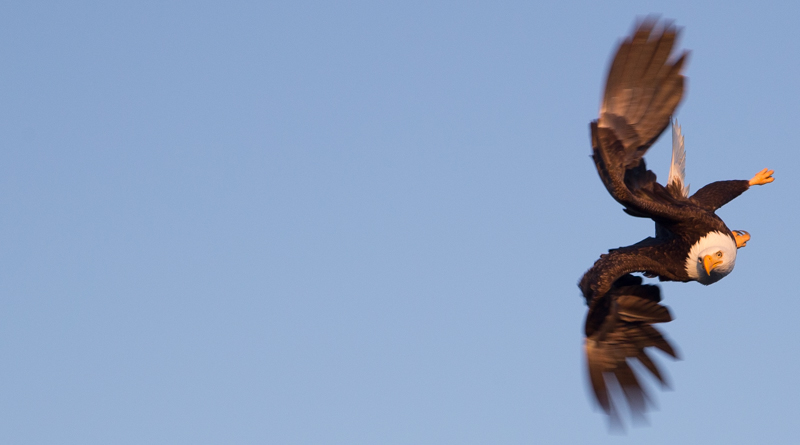 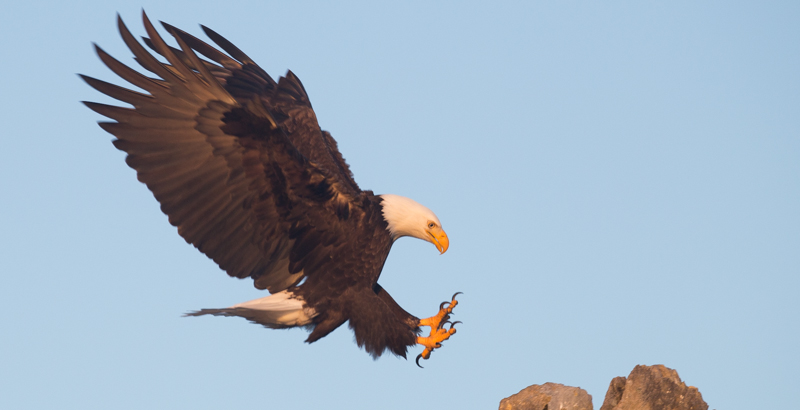 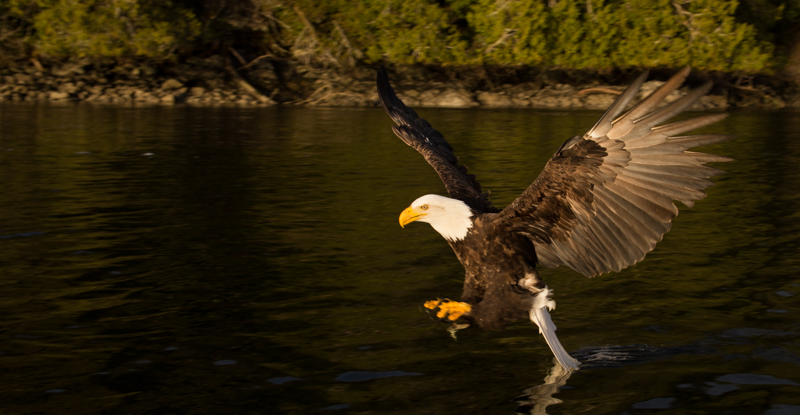 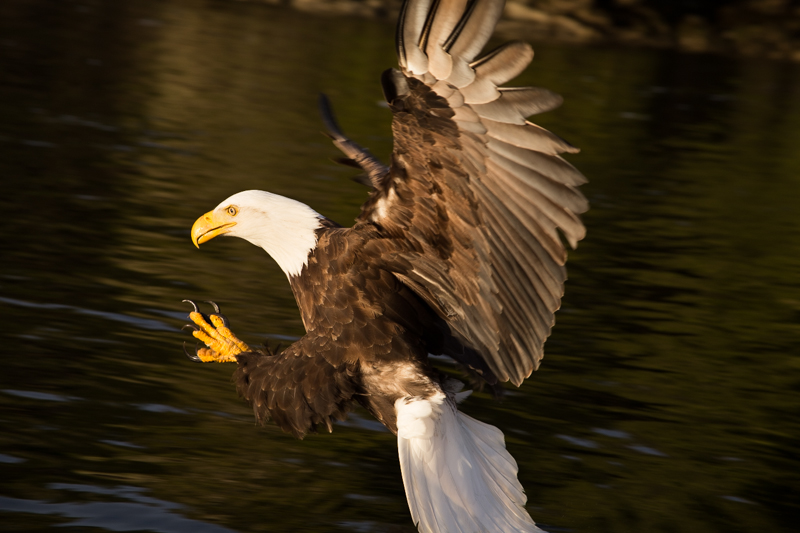 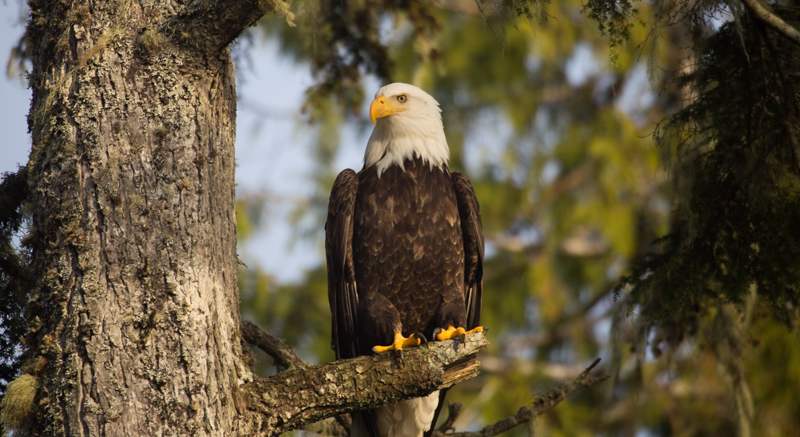 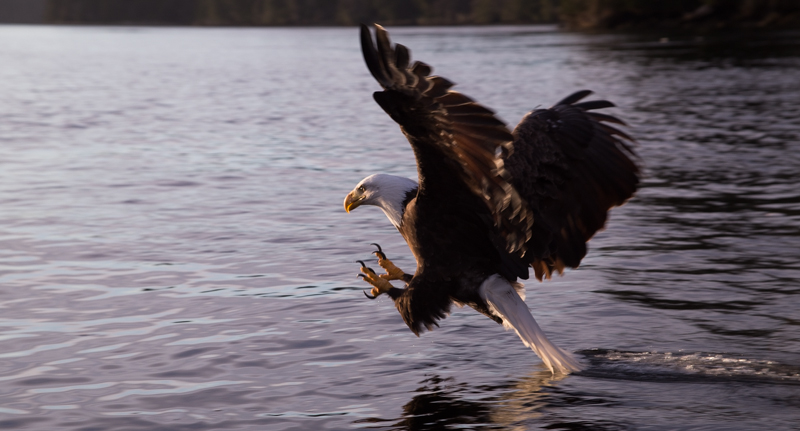 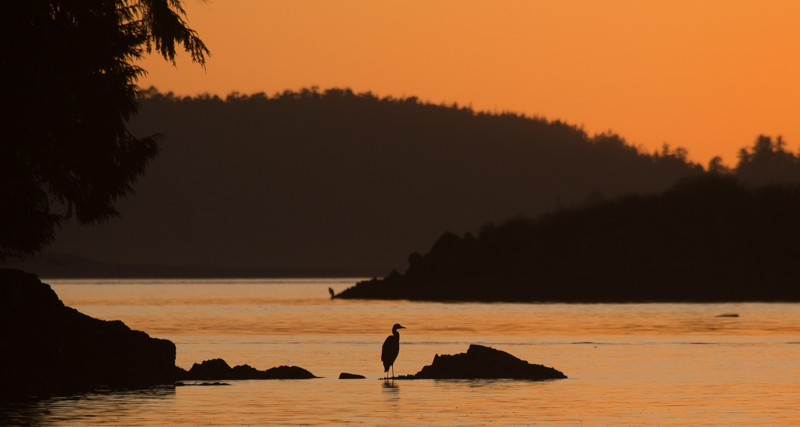 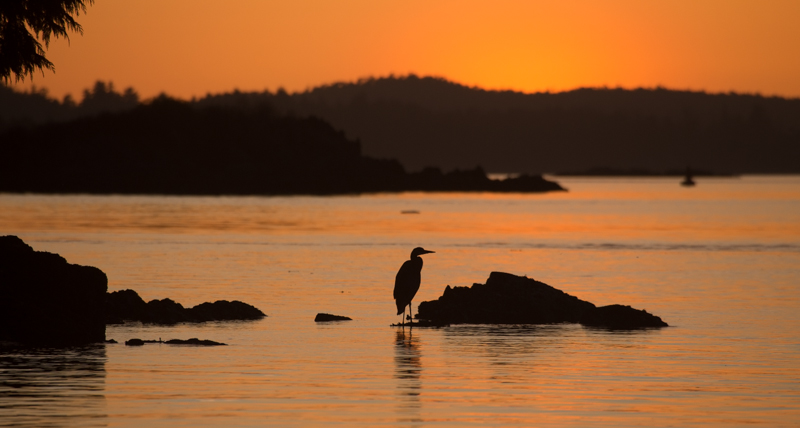 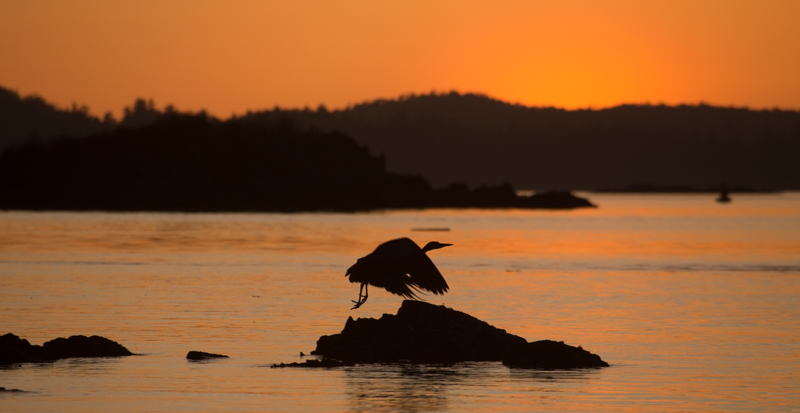 I didn’t see the second Heron at first. You can see it in the background of the first shot.
Each Heron guards it’s hunting grounds aggressively! 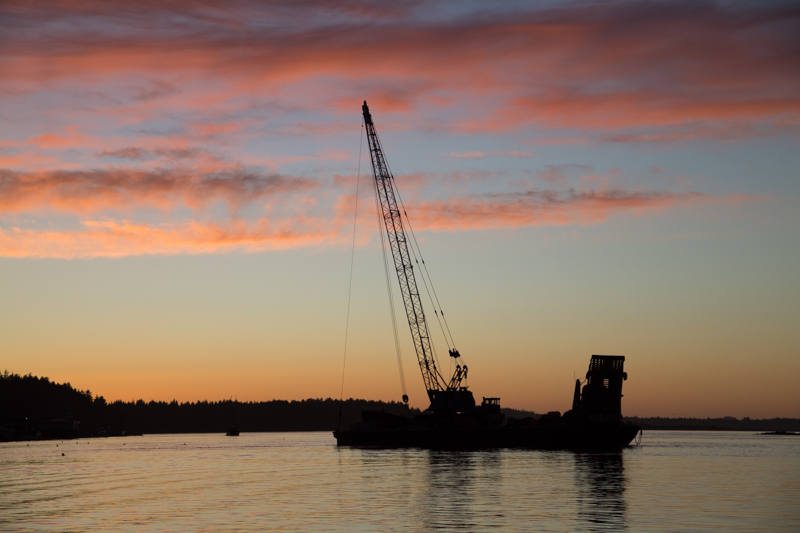