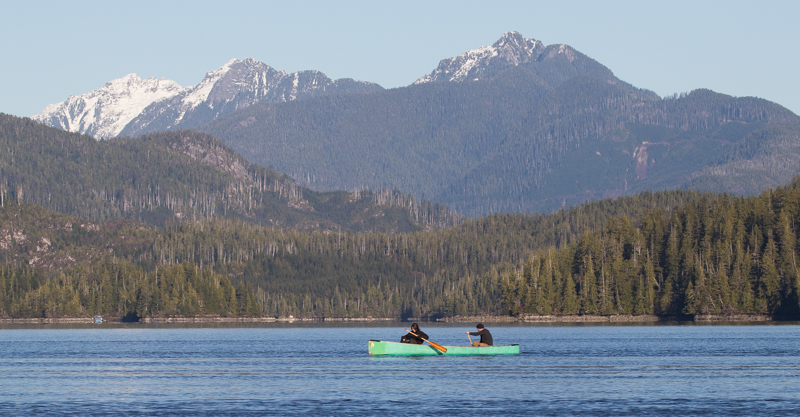 The weather was perfect…….a little cold,but perfect! After yesterdays fantastic Orca shoot I knew it would be hard to beat!
I wanted to see the Lions again down in Cannery Bay,so off I went. On my way there I came across a canoe paddling westward towards town. Brave souls considering the temperature & the fact they weren’t wearing any PFD’s!
When I got to Cannery I found only one Lion! The other day nobody was home at all! That float they love to lay around on was in darkness & will be that way for a month or so. A large hill to the south is blocking the light from the sun.
Said goodbye to my lonely friend & headed over into Tranquil inlet to see if the Trumpeters were around? I noticed on the way out that the Trumpeters were gone from that shallow bay just pass Tsapee Narrows. Turns out they were gone from Tranquil as well.
I did see a Harbour Seal coming around to check me out however.
Headed out of Tranquil. Stopped at Rankin rocks just out front because I saw the resident eagle perched perfectly on top! I do not get to see them very often.
Began my journey back to town. Stopped off at Tsapee Narrows to visit with the Daredevil. He was around & so was Delilah. They both have been coolish to me in the last month or so. With the bad weather we’ve been getting,they do not see for weeks sometimes.
Wished them both well for the New Year & took off. I went to visit with my girlfriend Maggie! She flew out to greet me! Moe wasn’t around.
The snow on Strathcona’s mountains was fantastic & the light by this time was even better! Took a bunch of shots of Maggie but didn’t get what I wanted exactly. Thanked Maggie & headed over to Deadman island to visit with Romeo & Juliette.
Both of them flew out to greet me! I yelled up to them as they passed over top,HAPPY NEW YEAR! I remember Romeo looking down at me as if I was crazy! They’re so funny the way they stare at me when I’m talking to them!
Took some great sunset shots of them both & said goodnight. I wished them well in the coming year & headed back in.

Todays shoot was good! I wish the Trumpeters were around but they are such a skittish lot. Another day in paradise folks! 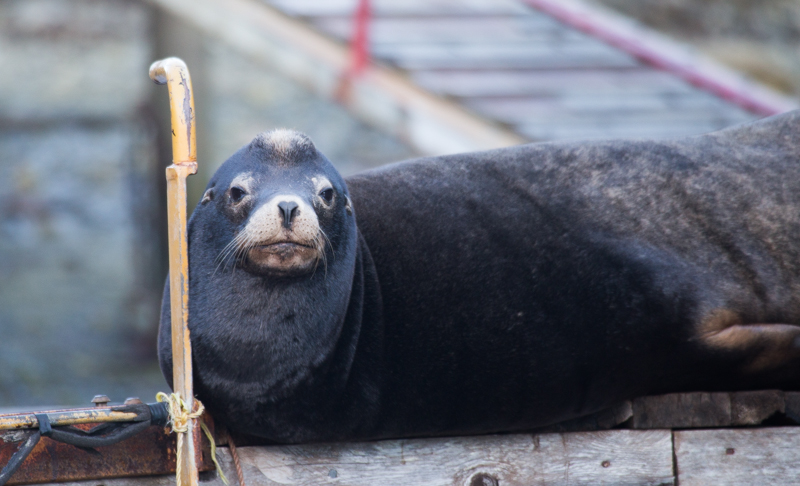 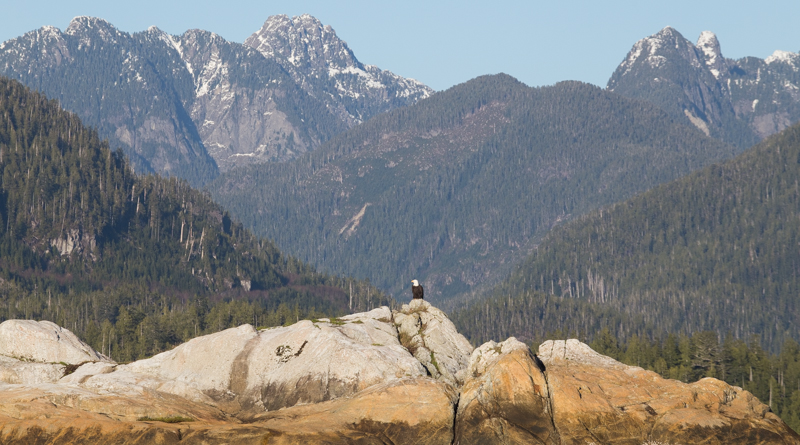 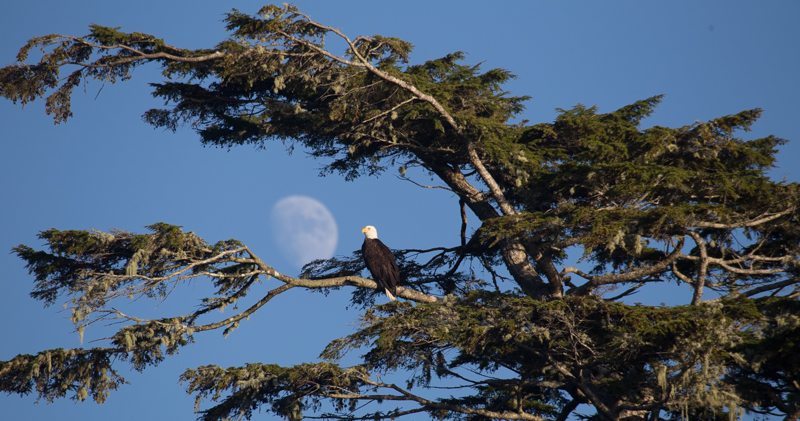 This is a eagle I haven’t named for years. He & his partner own this territory,Almond Islet. I go by there from time to time. They do not perch on Almond islet very often. I suspect their nest tree is on Warne island? 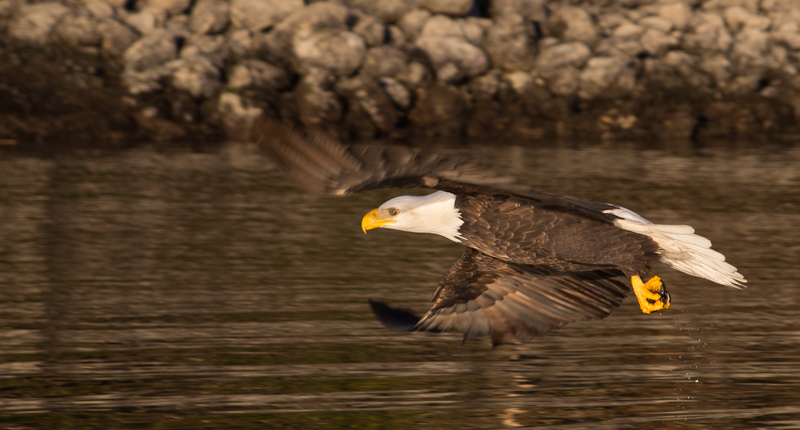 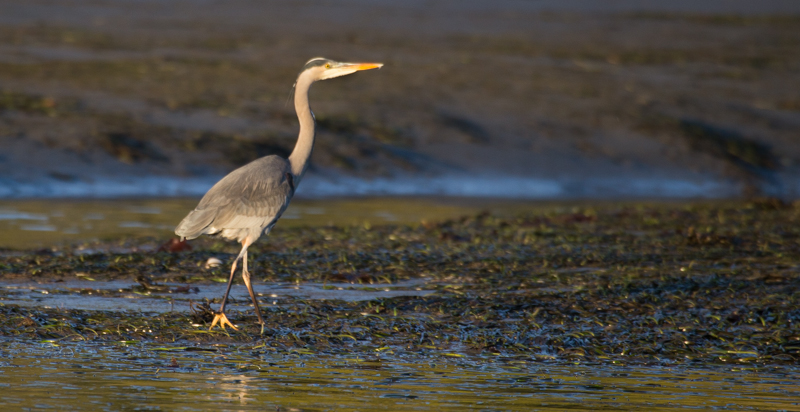 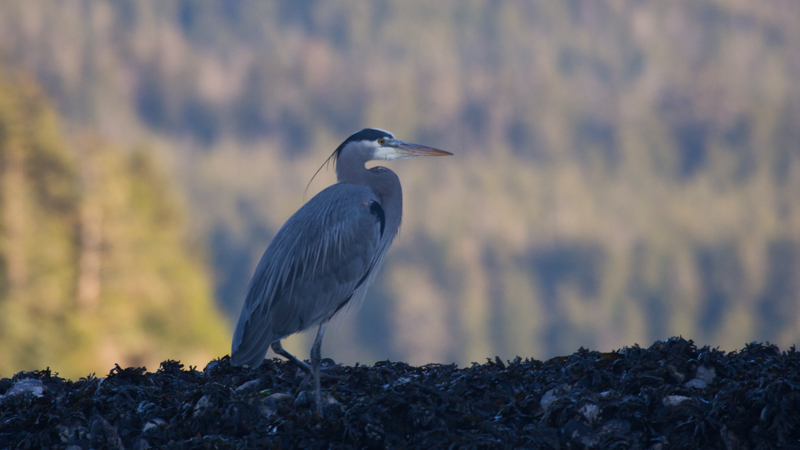 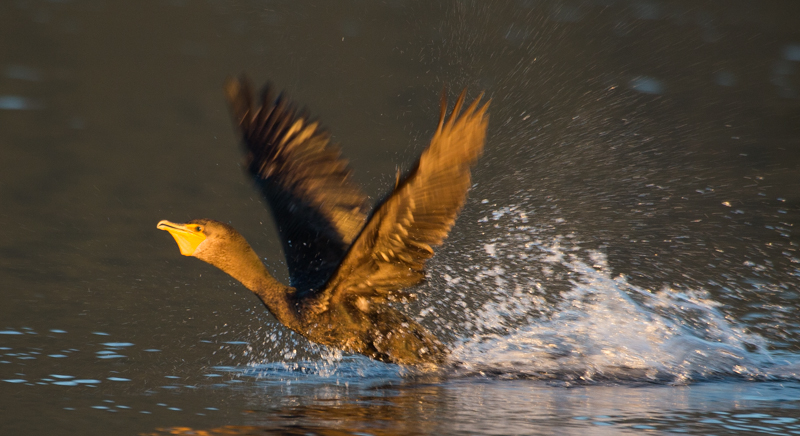 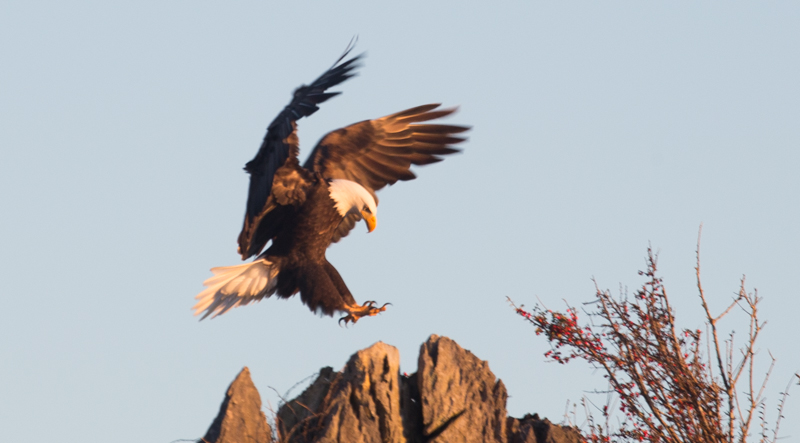 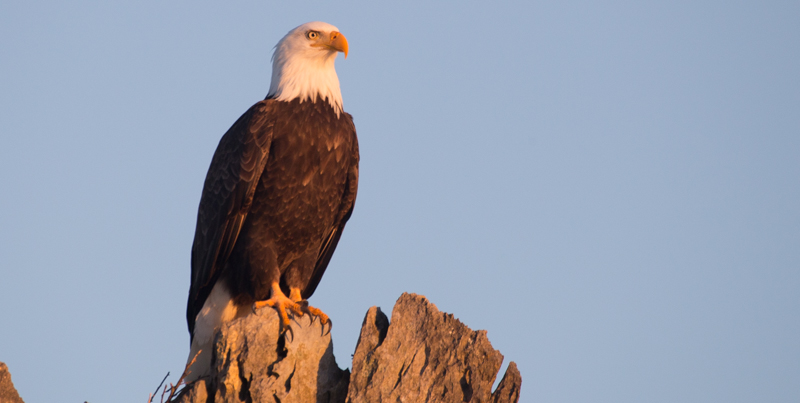 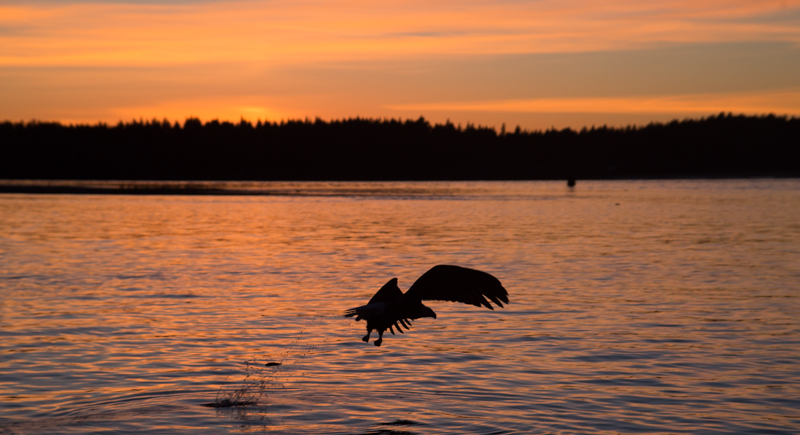 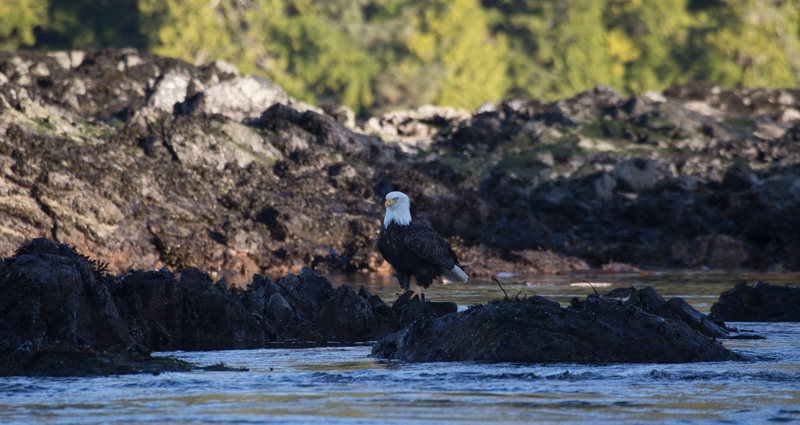 I had one of the best shoots of my life today!
I was down at the boat shed getting my gear together when I noticed two slowly moving whale watching boats coming into the harbour! I knew instantly that meant only one thing………….ORCAS!
I hurried & got my boat into the water. By the time I caught up with them,they had already gone through the harbour & we’re heading down Browning pass.
Because it’s winter time,almost all the Whale watching companies have closed down for the season.So there were few boats following!
By the time “we” reached Tsapee Narrows “we” we’re by ourselves! A dream come true! The light was excellent & there was absolutely zero wind!
I continued following them eastward down into Tofino inlet.

There are basically two types of Orcas.(there is a small population of “Offshore” Orcas) Fish eaters (Resident) & warm blooded eaters, such as Seals (Transients) http://en.wikipedia.org/wiki/Killer_whale

Typically they will surface after 5-10 minutes. They’ll usually “Dolphin” for three breaths (if their cruising),than “sound”. One never knows exactly where they will come back up? Thats why when they come into narrow channels like “Browning Pass”, it’s the best! You can pace them & anticipate “where” they’ll surface! Still a crap shoot no matter how much you know?
It was a small Pod of 4 Orcas. Two adult females with two Calfs. These are the T068’s. The T068’s are Transient Orcas (they eat Seal,Sea Lions etc)

The T0068’s did stop three times to eat during the three hours I was with them. They’d stop cruising & circle. Usually some splashing or water welling up happens. I saw some small fish floating on the surface at one point. They must of been from the stomach of their kill?
Gull’s quickly scooped them up! Gulls will sometimes flock over a kill site to pick up small pieces. It’s a good way of telling a kill site at a distance!

They went all the way down to the mouth of Tranquil inlet. The sun was beginning to get low in the sky. The setting suns colours painted the snowy mountains in a beautiful golden colour!
My goal was to line the Orca’s up with Tranquil’s snowy mountains in the background. I never knew where they would surface but when they did,I had to race over in behind them to line them up!
The sun had set by this time & I was shooting nothing but silhouettes. It was a gorgeous sky with horse tail clouds!
It was a long ways back to town & didn’t want to wait until complete darkness,so I said thank you to my new found friends & took off.

Nobody was exactly sure who these guys were? So I asked the “Orca Network” to ID them.
They believe that these are the T068’s. In the booklet entitled “Adventures with Killer Whales in Clayoquot Sound” by Rod Palm (Strawberry Isle Marine Research Society),the T068’s have 9 recorded members.
There were only 4 that were visiting us today. I believe the two adults are T068B,T068C,with B being the larger of the two.
The two calfs are T068B (or B1?) & T068C1. There are no pictures for B1 & B2,so am not sure who’s who here?
I’m pretty sure one of them was T068C1. T068B is a female born 1987. T068C is a female as well & was born in 1992.
T068B is 5 years older & as a result I believe to be the largest.
These are “Transient” Orcas. They eat warm blooded animals such as Seals etc. The “Resident” Orca’s are fish eaters. Anecdotally I have become aware that these rules do not always hold true!
If your a Transient Orca (meat eaters) & are hungry! You look around & can’t find any Seals & a school of Salmon goes by………..your going to go after them!
Conversely,If you were a Resident Orca & couldn’t find any fish around? If you were hungry & a Seal swam by,your going to go after it!
So these rules are for 95% (?,majority) of the time,but they do “cross” over from time to time & change their diet.(ever briefly) 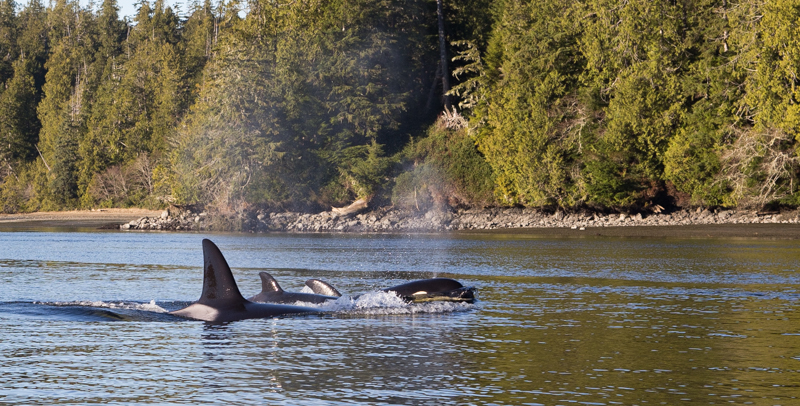 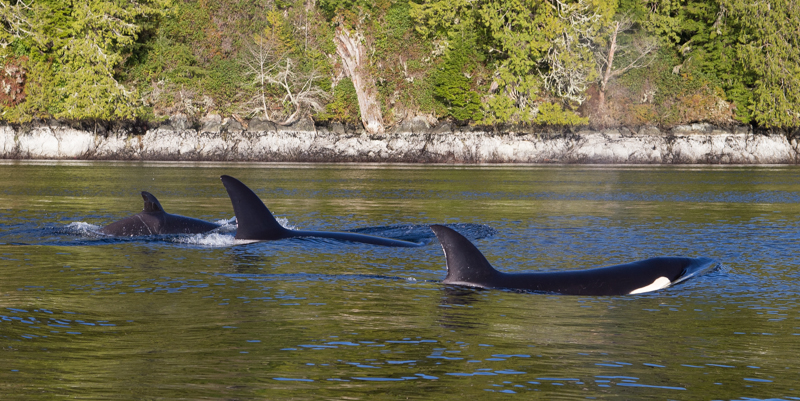 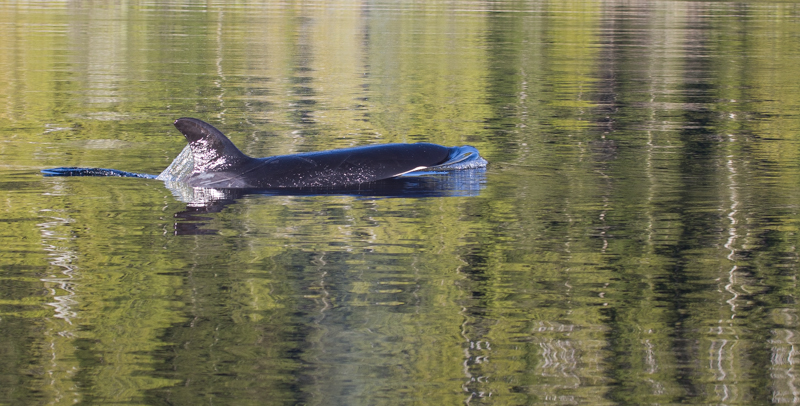 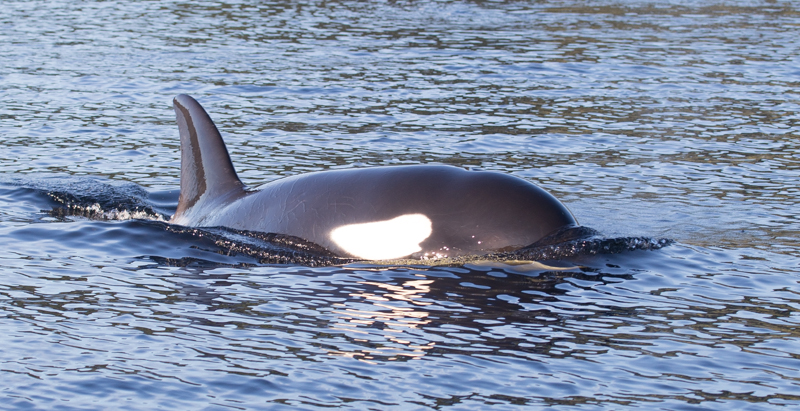 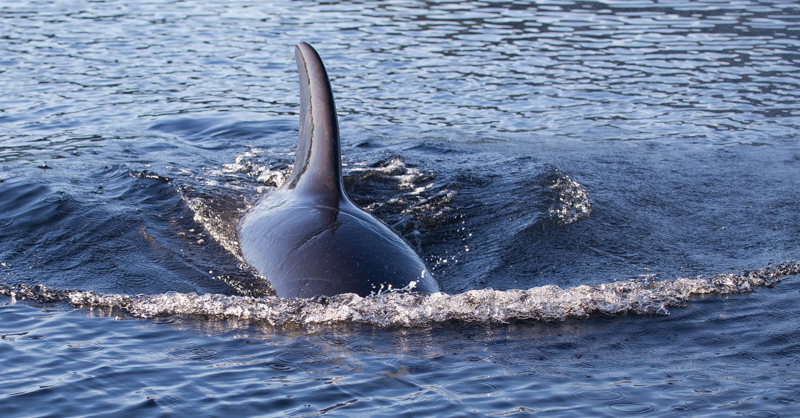 She caught me off guard & came up right behind me! She sounded & went right under my boat!
Orcas are very intelligent creatures & know exactly where they are!
I once had a large male roll onto his side so his 6 fort dorsal wouldn’t hit my boat as he silently glided under my boat! 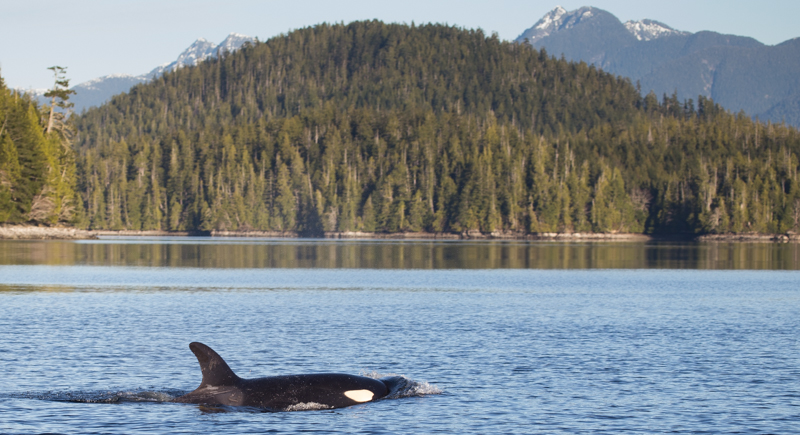 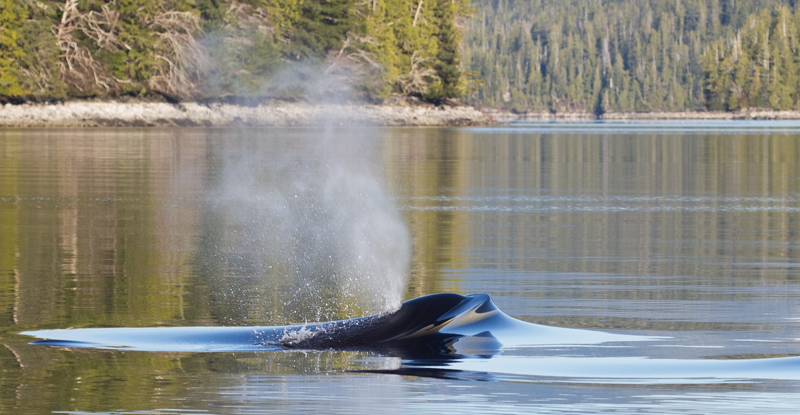 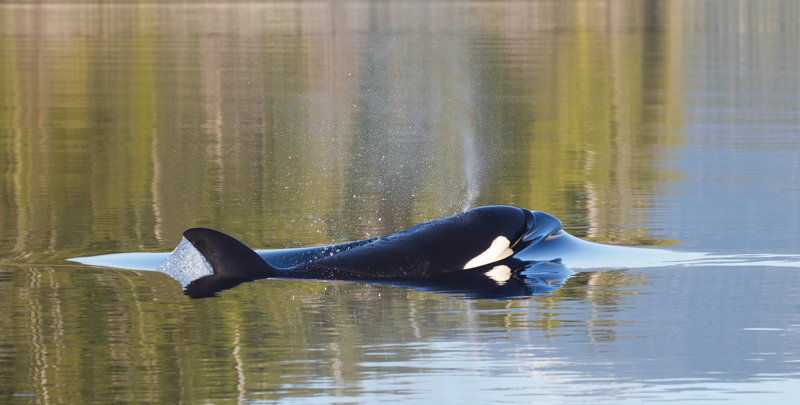 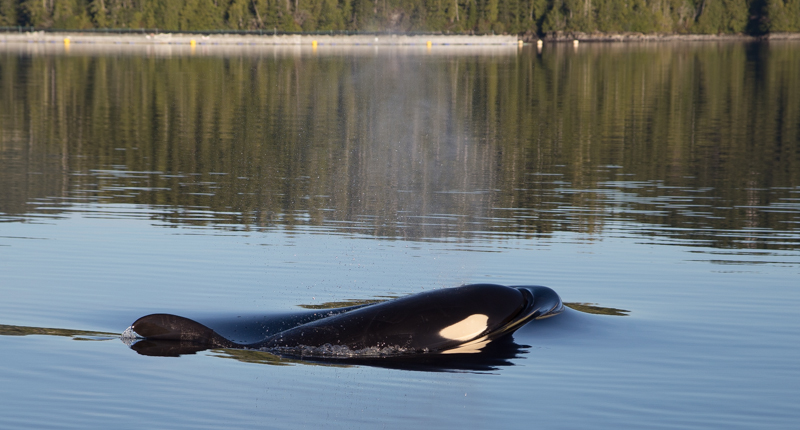 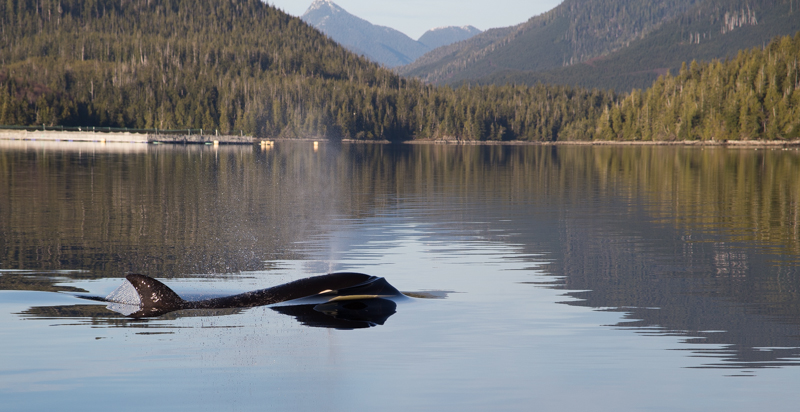 When a Orca wants to see whats going on above,they “Spyhop”. They are very intelligent creatures & as a result, get curious! They slowly come out of the water,look around & slowly descend.
This happened on three separate occasions & I believe it was the same Orca, T068B.

When the Pod came closer to the mouth of Tranquil inlet,I tried to get in behind them to line them up with the snowy mountains of Tranquil in the background!
Easier said than done!

This is a spot where they made a kill! It all happened below the surface. When you see them circling tightly & sounding quickly,somethings got their attention & that almost always is FOOD!

She did a second Spy-hop near sunset. I was always at a great distance when she did this. So I got more scenery in the background.
A fellow photographer (Adrian Dorst) got a excellent up close shot of one Spy-hopping once! A beautiful poster was made & became famous! 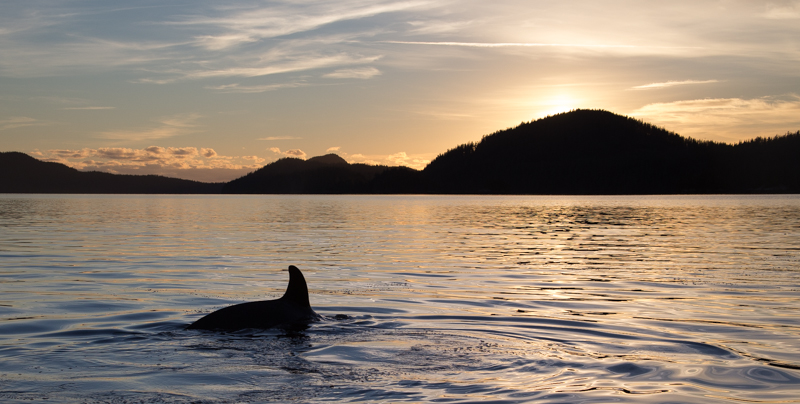 I saw some fish floating on the surface & they looked fresh! When they did their third kill,the animal must of regurgitated them or been thrown free by the tearing?

They were grabbing the last pieces of their kill.

She seemed curious about me. This was her third Spy-Hop to check me out. 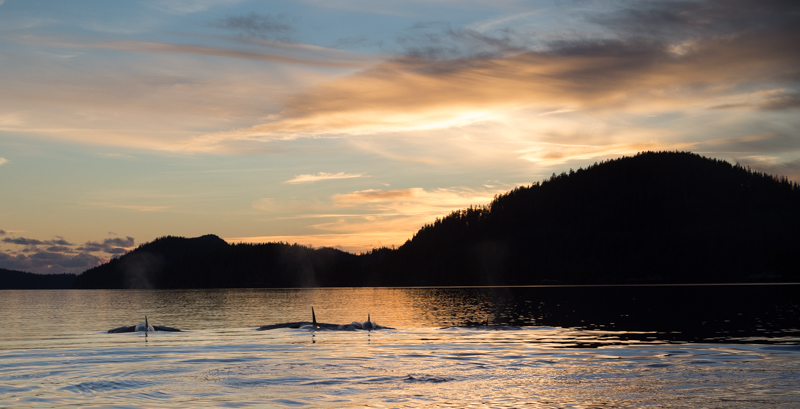 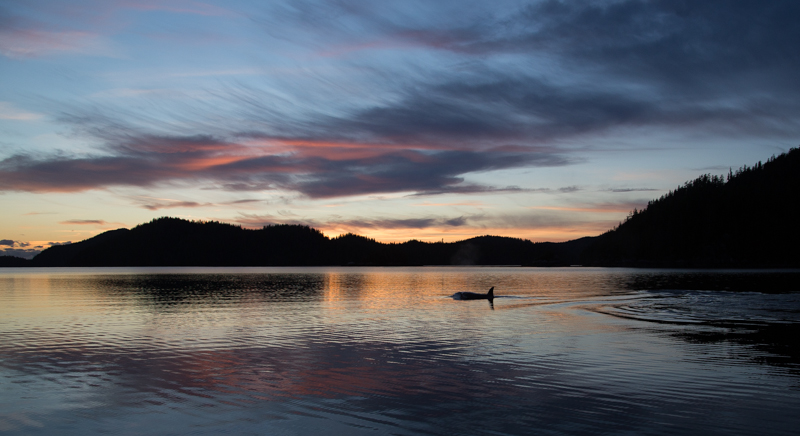 This is a family unit of 2 adults & 4 cygnets. They are spending winter down in Tranquil. Because they are going to be hanging about,I thought they should be named.
The male will be called “Tavish” & the female will be “Torry”.