These guys are fast and the only way your going to get a shot is to be clever.
Put a piece of tape on three of the four feeding stations. This way he/she has to go to the one that your focusing on. use a tripod and flash. You will need to keep very still and that means your going to have to keep your hands up on the camera. If he/she

comes by and you have your hands by your side and you move your hands up to your camera……he’s long gone before you ever touch your camera. If you want to get comfy,lower the feeder so that it’s on a better angle with you sitting down. This way you can last longer. The blood does drain from your arms and you just know it’s going to come by just when you lower your

I got the green wallpaper by hanging the feeder lower and getting a lower angle.
You’ll have alot of bad shots with these guys. One out of ten is about right. 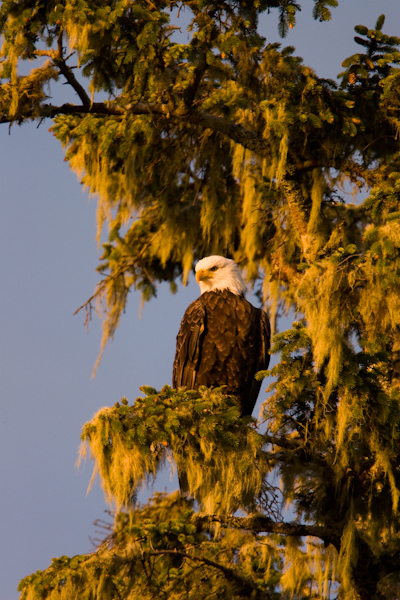 Romeo is always good for a sunset pose.
Because they both are use to people driving by in their boats,they can be approached closer than most.

The harbour has during the summers this great warm light. 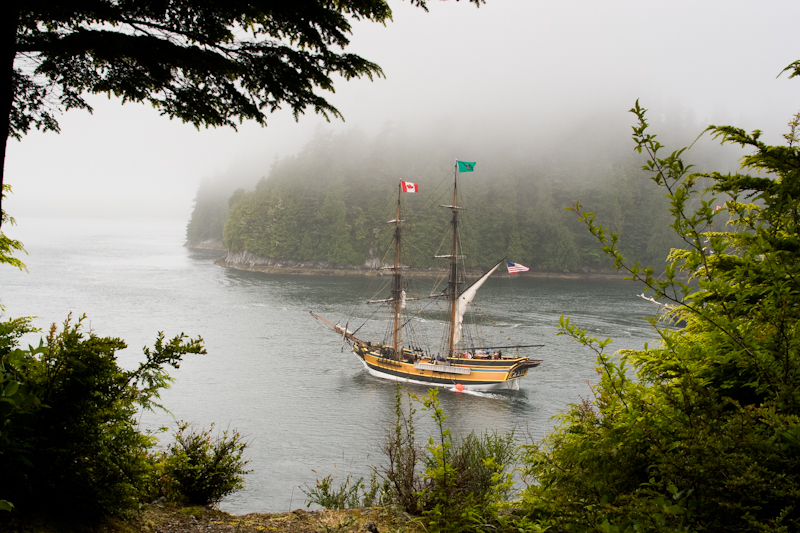 After a great visit ,with even better weather. The Lady Washington heads home to Aberdeen, Washington State.
It’s hard not to take a good shot of any Tallship !

I used my big lens to compress the foreground and background. This makes the mountains look closer than what they actually are. They are about 22 miles away.
Tricky because boats are always getting in the way. However,I was the only one out there for the entire dual ! Amazing !!

It was fantastic light and I was so lucky to be the only one out there with these guys !
I can’t wait for the next time they come !

The Lady and Chieftain went at each other ,dueling 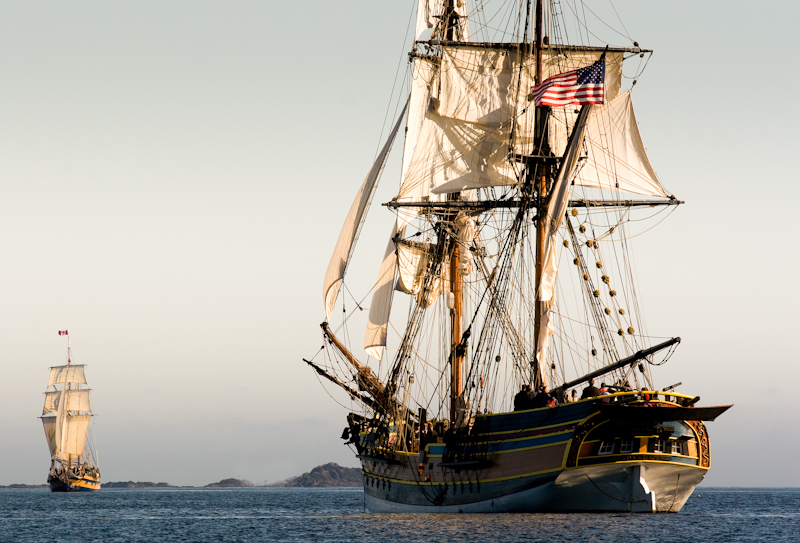 Both of these ships were part of theTall Ship Festival. Every three years there is a Tall Ship Festival on the west coast.
I believe the order goes like this: Vancouver,Seattle,Victoria,Port Alberni and than lastly …………Tofino!
On this night,they were dueling! It was the last night of their stay in Tofino and the weather/light could not of been better! We lucked out! Not only did I luck out for weather,but also for traffic!
I was the only boat out there from start to finish! I had them all to myself.
A few whale watching boats dropped in for a few minutes,but took off after 5 minutes.
I realized after shooting for awhile, that Strathcona’s mountains would be a fantastic backdrop . I zipped to the south of them and tried to get as far away as possible!
I than used my big lens and zoomed in them. The longer the focal length,the better the compression factor will be between the foreground and the background! It makes the background “appear” to be closer than it actually is! It’s much more dramatic!
Felice island was blocking some of the view .
I tried to get shots of the cannons going off. I never knew when the cannons were going to fire ,but had to be ready to shoot at any given second!
The Hawaiian Chieftain is the one in the foreground and The Lady Washington is in the background. She had just fired her cannon! 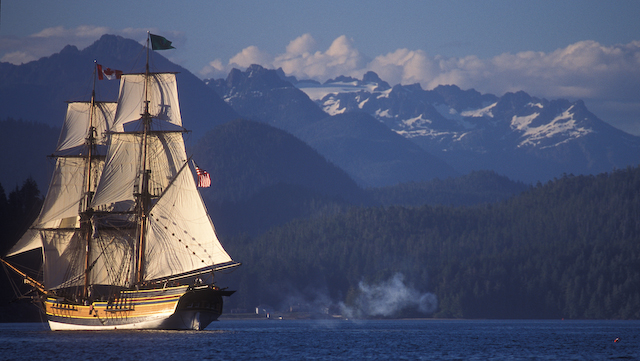 They obviously do not fire anything from the cannon! Gun Powder blanks!
However,for whatever reason due to physics………she did blow a smoke ring! I remember seeing and reacting very quickly!
I thought the ring was cool! The only one of the night too I might add!

The Hawaiian Chieftain was built in Lahaina,Maui in 1988.
Her original name was the “Spirit Of Larinda”.
She has a 5.5 foot draft and weighs in at 64 tons. She also has a steel hull and is a “Ketch” 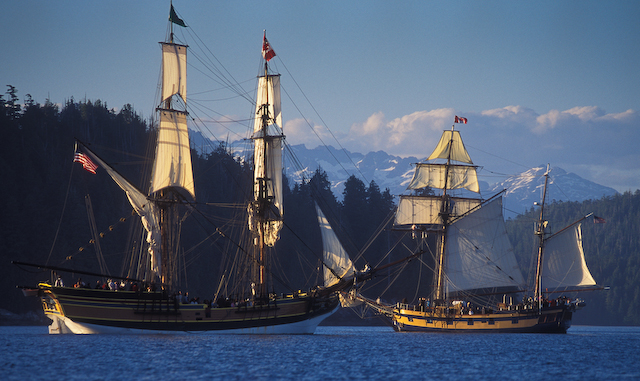 Lady Washington on the left,and the Hawaiian Chieftain on the right.
They did several broad side passes,all the while firing their cannons at each other. I was several klicks away from them and it was still loud! 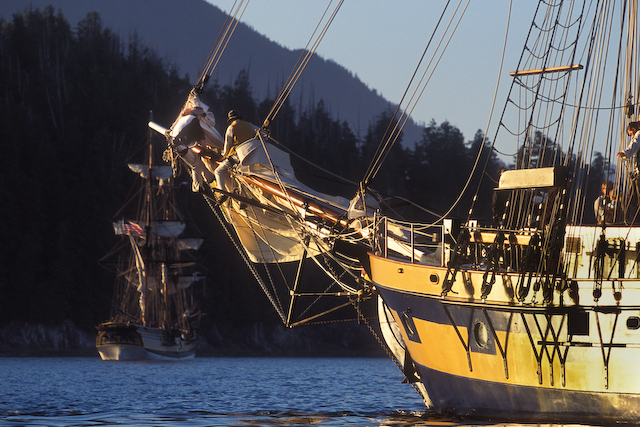 The Duel was over and the crew was starting to take in the sails on the ship.
The Hawaiian Chieftain is in the foreground.

It was a great sunset as the Lady Washington

slipped ever so softly into our Harbour.
The Canadian and Canadian Coast Guard flag are in the foreground. 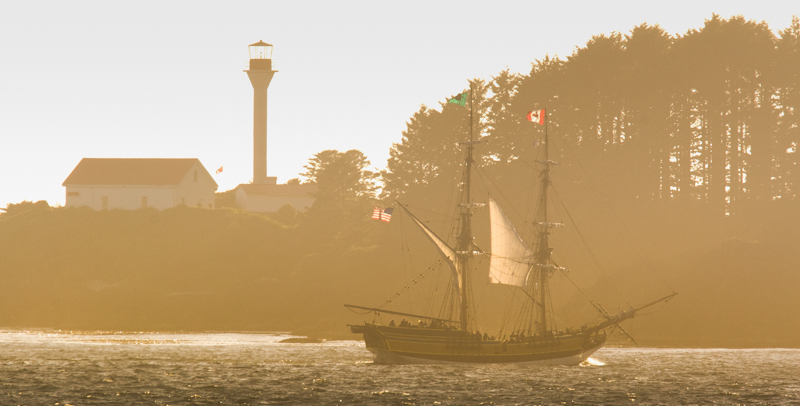 A CDN Coast Guard vessel leaves Tofino just as a Tall ship enters at sunset.
Once again,it’s all about being at the right place ,at the right time.

I shot this when they both were tired up for the night. They both have such beautiful lines! I noticed the moon and tried to take advantage of this rare opportunity!
They both are from Aberdeen, Washington State.
The Lady Washington was the ship that was used in the movie Pirates of the Caribbean ,”Curse of the Black Pearl”.
The Chieftain is the one closest to me and The Lady Washington is on the far side.

I forgot that they did drop into Ucluelet before they came to Tofino. I can’t remember if they stayed the night or were there for a few hours only?
I was waiting out by Amphtrite Lighthouse. I wanted to get some shots of them coming out of the harbour and around the Lighthouse.
You can see the Lady heading north to Tofino here, and the Chieftain was following close behind. However too far apart to fit them both into this framed shot! 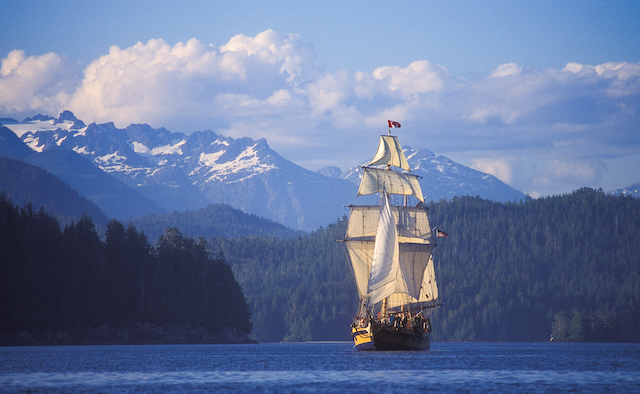 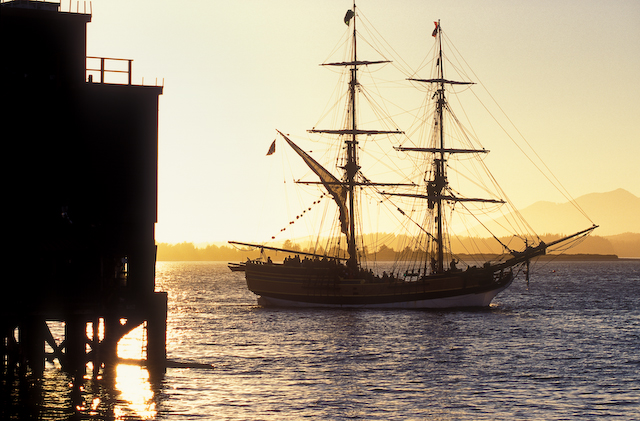 The Lady was built in Aberdeen Washington in 1989.
She has a weight of 178 tons with a draft of 11 feet. Her hull is made of Douglas Fir and she is a “Brig”

I always like this scene,but just haven’t figured out how to take advantage of it yet.
It has potential!

At Lovekin point there is a perch tree that the two eagles use.
I caught this guy jumping. I think I might of spooked him. They are not use to people walking around on this point. They figure I’m a threat and book it. 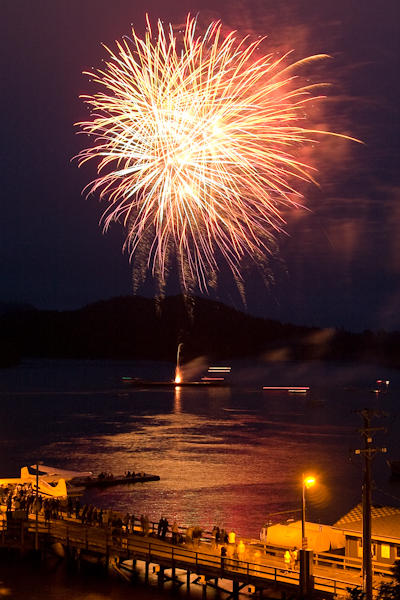 I had to boost the ISO to the max for this shot.
I use a 5D and the noise level is low on these guys.